The poetry of medieval maritime travel

I have been reading Arab navigation manuals and travelogues, and there is such poetry in the navigation manuals in particular. It is the liminality of the navigation texts in particular – between art and science, familiar and wholly other.  I just love the enumeration of the principles of navigation for example, by Ahmad Ibn Majid al-Najdi (who, some say, is the master-navigator who in a fit of drunkenness, revealed the route to India to a disconsolate Vasco de Gama beached in East Africa).  These are:

I especially love the politics element.  Here is a beautiful passage from Najdi himself:

Know oh reader, that sailing the sea has many principles. Understand them: the first is the knowledge of lunar mansions and rhumbs and routes, distances, bashiyat, latitude measuring, signs (of land), the courses of the sun and moon, the winds and their reasons, and the seasons of the sea, the instruments of the ship. .. It is desirable that you should know about risings and “southings” and the methods of taking latitude measurements and their variations and graduations, the risings and settings of the stars, their latitudes, longitudes and distances and their passing the meridian… It is also desirable that you should know all the coasts and their landfalls and their various guides such as mud, or grass, animals or fish, sea-snakes and winds. You should consider the tides, and the sea currents and the islands on every route… (p. 77)

I also love the sense of wonder in these accounts.  Here is the utterly wonderful and observant Sulayman al-Tajir, an itinerant merchant from Siraf (on the southern coast of what is today Iran), describing a sperm whale in the 9th century AD: 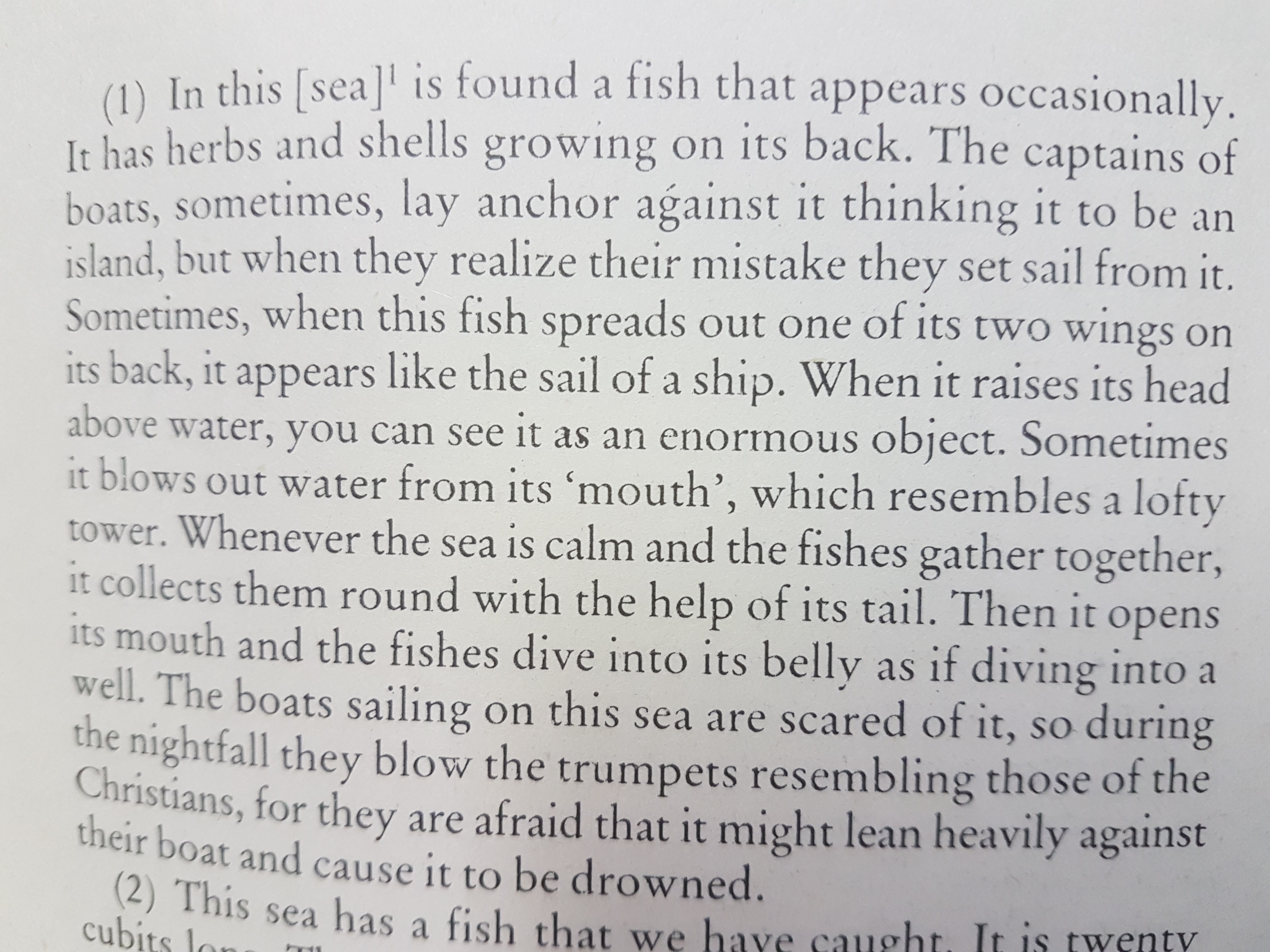 “This sea” is of course the Indian Ocean. And I love the sense of fear and wonder in the account.  The masterful translator and annotator of Najdi also points out Najdi’s fascination with sea-snakes:

Sources for the above:

Al-Najdi, Ahmad b Majid. 1971. Arab Navigation in the Indian Ocean Before the Coming of the Portuguese; being a translation of Kitāb al-Fawāʾid fī uṣūl al-baḥr waʾl-qawāʾid of Aḥmad b. Mājid al-Najdī. Ed. G.R. Tibbetts. London: The Royal Asiatic Society of Great Britain and Ireland.

Update: a colleague insists that I better emphasise that the De Gama connection has been totally debunked, since de Gama’s guide was actually a “Gujarati Moor” – which Al Najdi was not!