Steaming through the southern Arabian Seas – somewhere between Aden and Mukalla

What a surprise this morning when the Filipino A/B, Alexander said to me “khasteh nabashid”. Turns out he was for two years between 2009 and 2011 working on a bulker belong to IRISLN – Islamic Republic of Iran Shipping Line. The bulker went between Bandar Abbas, Bushehr and Bandar Imam Khomeini in Iran and either India or China and carried ingredients of fertilisers, especially, sulphur apparently. Alexander seemed quite sweet and mentioned how he liked the Iranian food, the chapatti-like bread, the “yellow rice”, the kababs –and here he made the motion of shaping a kubideh around the skewer. He also mentioned that the seafarers on the ship ate pork during Ramadan, and the oiler told him about discos and drinking in Tehran. The ships were mothballed at port in 2011 when the sanctions hit and Alexander moved on from Iran. But he seemed quite affectionate and not particularly complaining – except about the heat and humidity in the Iranian ports.

As for us, we are steaming through an empty sea. No fish (although Alexander said he saw dolphins at 8 this morning), no ships, no land. Not too unlike the Mediterranean, except for the fact that there are even fewer distant ships on the AIS, although the Zim ship I saw going through the Canal, Zim Qingdao, seems to appear on the AIS, though at a long distance away from us. Looking at the map of Bab al-Mandab again, I was so struck by the imperial division of territory around the strait: with Britain controlling the Asian landmass at Aden/Yemen, while the French held onto Djibouti, a sliver of land carved out of the “natural” geography/polity that surrounds it and made into a new political entity with its own control of the sea-space adjacent to it.

This morning, Lysandro was telling me about how the medical exams for seafarers are getting harder and harder and how they are measure for blood sugar, blood pressure, weight, diabetes and all sorts of other things. He mentioned that four months before going home, he would begin a diet in which he would stop eating rice and bread and other carbs so that he could lose weight. I wonder if these medical exams are indeed getting harder, or it is that Lysandro is getting older and finds it more difficult to meet their demands. Of course this in itself is also a hardship – that you have to be so young to do this job and no amount of demand on the job cancels the need to keep fit while on board.

After a dry spell, I have now seen an EU warship (F803) with a helicopter onboard off the coast from Mukalla. The helicopter made a circle behind the ship and landed on the deck again less than a minute later. A strange performance. 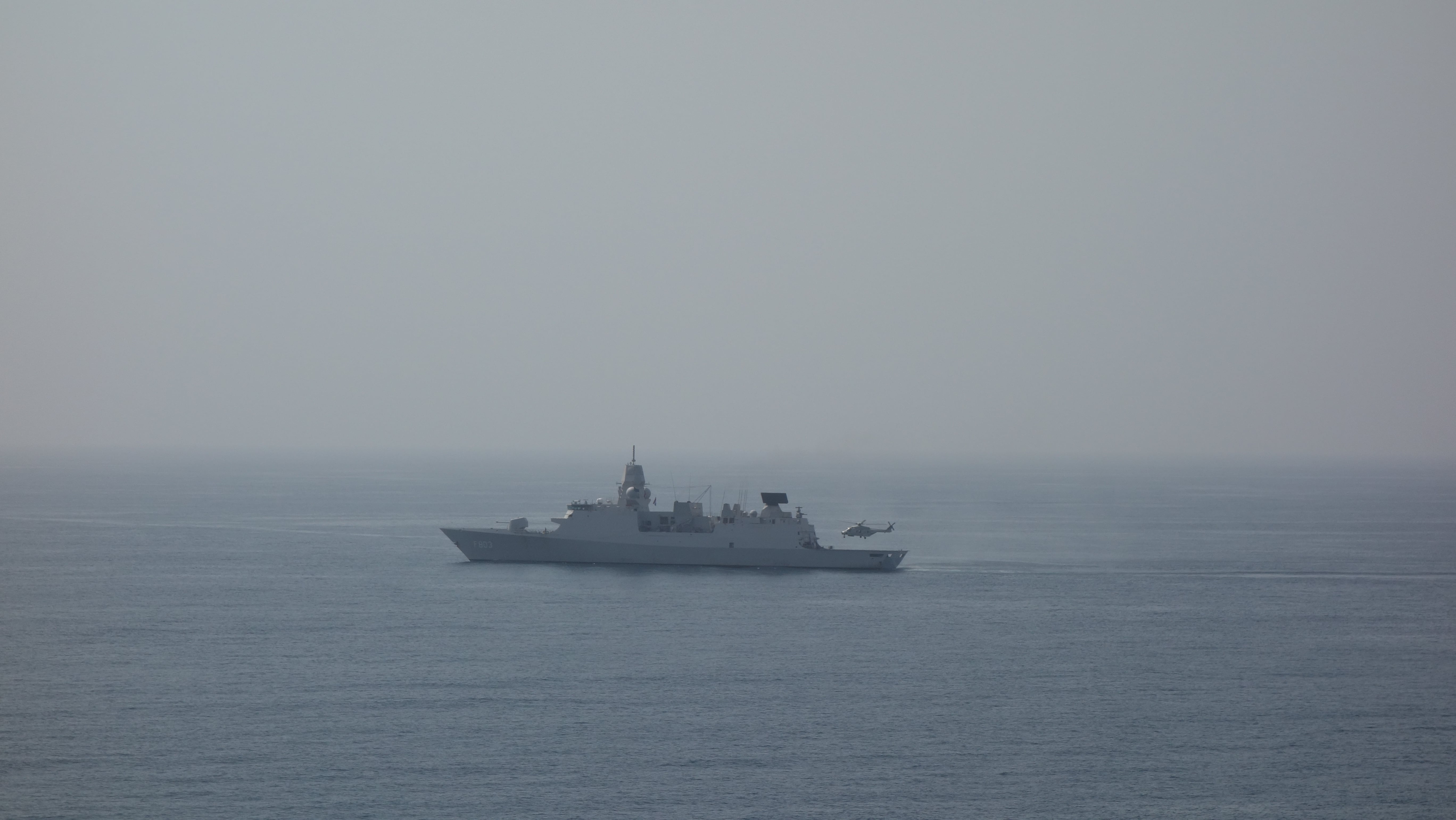 Then, a few miles further, both flying fish and dolphins playing the water. Of the latter there were so many. And a fishing boat moving –at 4 knots, a long way –40 nautical miles– from the shore. Like the guys last year, Danilo (the A/B) and Anthony (the third officer) were trying to scare me into thinking this was going to be a pirate attack. No such chance, although Anthony did say that last November, in the Red Sea, the ship he was on was approached by two skiffs at speed on both sides and that there were 9 people altogether on the skiffs. When they approached, everyone was called to the muster stations and all but the captain and the chief hid in the citadel. Thankfully, the weather was bad and the skiffs could not catch up with the large containership Anthony was on.