The Mediterranean; steaming towards Damietta

The Mediterranean is such a lonely sea. Its vastness is such that one doesn’t really see ships passing except in the far distance and the AIS screen shows ships so far that they do not appear on the horizon at all. Bojan the deck cadet talks about how the air and light in the Mediterranean so exceed in their pleasure and beauty the pollution of the sea and the air in China. And Marco the second mate talks about the difficulty of port visits with all the demand of manoeuvering the ship. It seems that the proliferation of ports is what makes the work difficult – as it requires attentiveness, presence, difficulty. And apparently there is a hierarchy of access to port passes. And the second mate is far low on the totem pole.

This hierarchy is also present at meals. The officers’ table is different than the cadets’ table. And I get to eat on my own beyond a partition. There is an interesting difference though between Callisto and Corte Real: Corte Real had a far more formal dining culture. The master sat at the head of the table; his wife to his right and the chief mate to his left and then the chief engineer, and then the officers in descending order of rank. Here, everyone just grabs a seat and sits next to one another. The captain is sometimes in the middle of the table and sometimes at the end of it. This may have something to do with how the chef dictates the culture of dining on board this ship. With the captain being new to the ship, the ethics of eating must have been established by the chef, who also does not serve the officers by plate, but rather provides the foot buffet style and everyone gets to serve themselves (which frankly, I prefer, as I get to serve myself as much or as little as I desire). If this is the case, then it is interesting that a crew member gets to determine the shape and rigidity of the shipboard hierarchy, at least at mealtimes.

I have also told Lysandro (the messman) that I wouldn’t mind trying some of the crew’s food. The officers’ food –like last time- is a bit inconsistent. The roast chicken and the goulash were delicious, but the fish was absolutely terrible. I am hoping to try Filipino adobo or chicken curry instead. We shall see.

Nice coffee is abundant on the ship too, thankfully, and I have a little box of Danish cookies in my cabin for when I feel peckish. I have not asked about booze and shall refrain, but interestingly Lysandro was telling me that the Filipino crew do not really do karaoke like the crew on Corte Real did almost every night. Also interestingly, the Filipino crew here is into working out with weighs and playing table-tennis, which is also different than the men of Corte Real. On Corte Real, the Balkan officers were into weight-lifting, but the Croatian men on Callisto seem far less into having those enormous muscly arms and have far more ordinary bodies.

Being so familiar with shipboard life means that already, two days into being at sea, I have settled into an iron routine: coffee for breakfast, a run on the treadmill, a couple of hours of sunbathing and reading on my deck, an hour of hanging out in the wheelhouse, lunch, a nap, some reading and writing, and perhaps a walk along the deck, although there seems to be a lot more ceremony involved with walking around the deck on Callisto. The third mate even wanted me to wear overalls, which thankfully turned out not to be necessary. But I did wear a helmet and carried a radio –the latter of which I didn’t have to do on Corte Real. The layout of the deck is also different on this ship – and you can glance on the lower-deck aft, where the previous captain has laid some Astroturf, apparently for twice-weekly football games (according to Bojan). But the current captain doesn’t seem too much into playing football. After the walk, more reading and writing until dinner at 6, and still more writing and reading and perhaps a visit to the wheelhouse. The last two nights, I have been so shattered that I have fallen asleep at 9 or 9.30. I shall definitely get a lot of rest while onboard the ship. 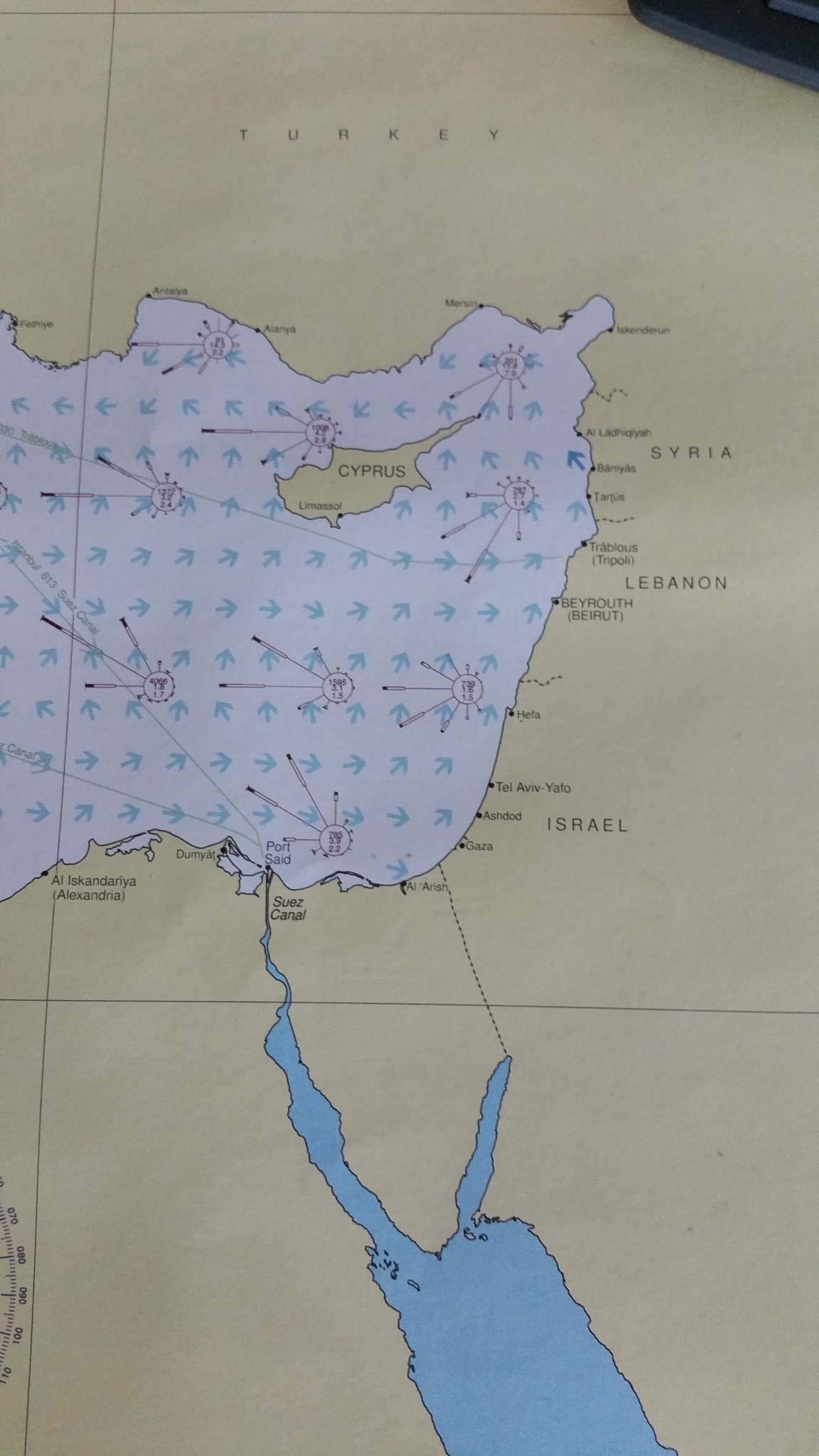 As we steam through the Mediterranean further and further towards its southeast corner, the air is becoming more humid and there is a haze on the horizon. The sea is still lonely, but as the sea narrows in its eastern reaches, I suddenly find that my phone is picking up Greek mobile networks. To be handed in this way from network to network is strange – as if there is no way to escape the reach of those webs of communication and transport so central to our lives today. Below us, on the floor of the sea, lie the vast flows of communication cables, pipelines, and wreckage. Layer upon layer of history. Above us, in “the ether”, the microwave emissions, the mobile signals, satellite signals. My phone has already located itself via GPS, and although the ship time is officially GMT+2, my phone is already in the time-zone of North Africa, at GMT+3. So I move in two time zones simultaneously, connected to Greek networks intermittently, and steaming towards Egypt. This anchoring of our time – and also our eastward movement through space- to Greenwich immediately makes me think of the extraordinary reach of the British empire; its insistence on setting the standards of motion and defining the parameters of long-distance shipping. Greenwich as the point zero of ships moving upon the deep.

Later in the evening:

The adobo at dinner was utterly delicious. If I can from here on out avoid the officers’ food and eat the crew’s meals I shall be in clover!

Fascinatingly, a note arrived today from the UK P&I Club (whatever that is), speaking about a new scam at Suez. Apparently some guys board ships at Suez anchorage, claiming to be from United Mediterranean Shipping and conduct “health checks” including taking blood, supposedly on behalf of Suez Canal Company. Then after finishing, they demand a payment from the master. Turns out of course that they are wholly fraudulent. It is fascinating to see the hostility voiced by the officers against the scammers in Suez.