About Today: Steaming the security seas 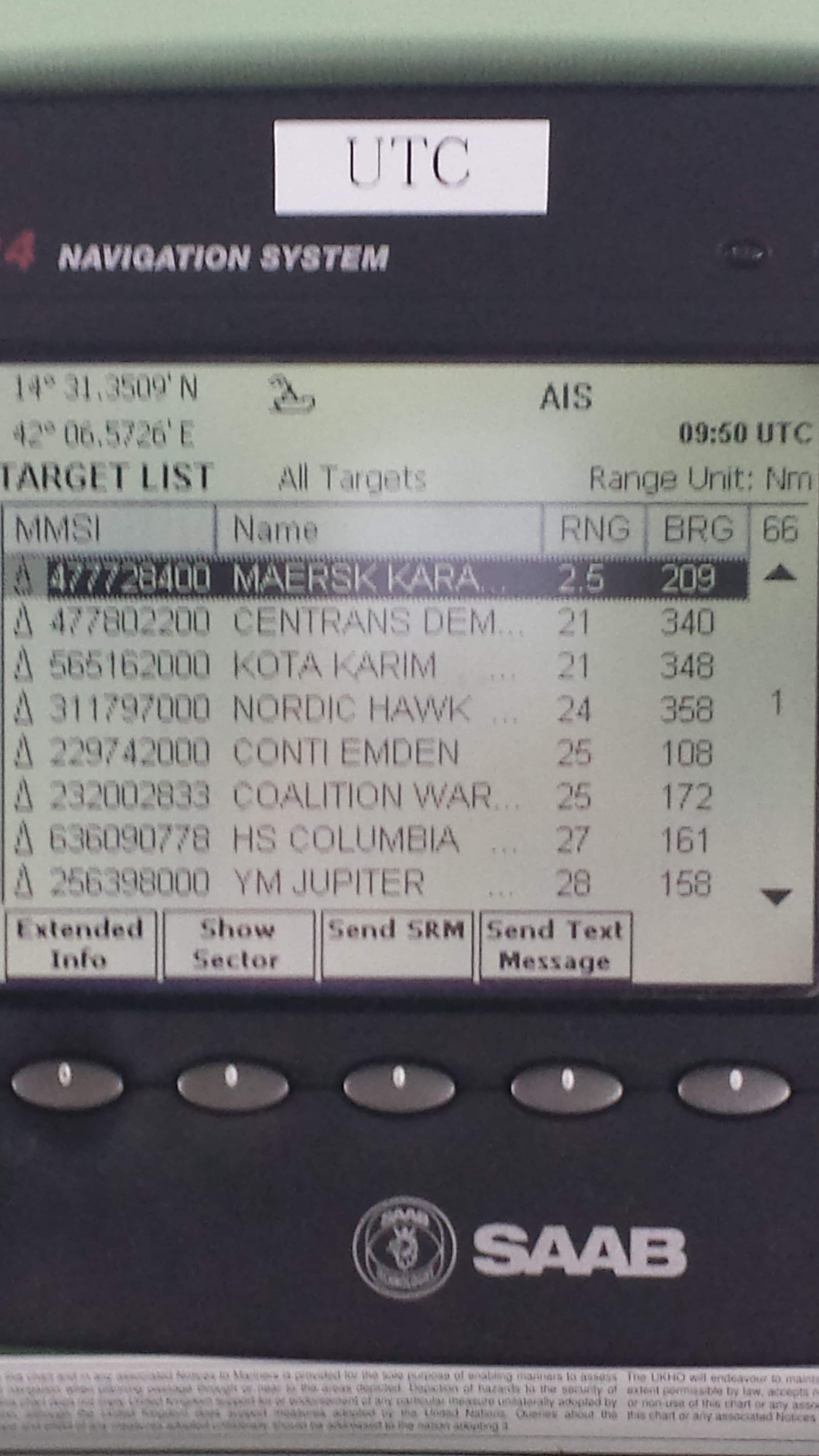 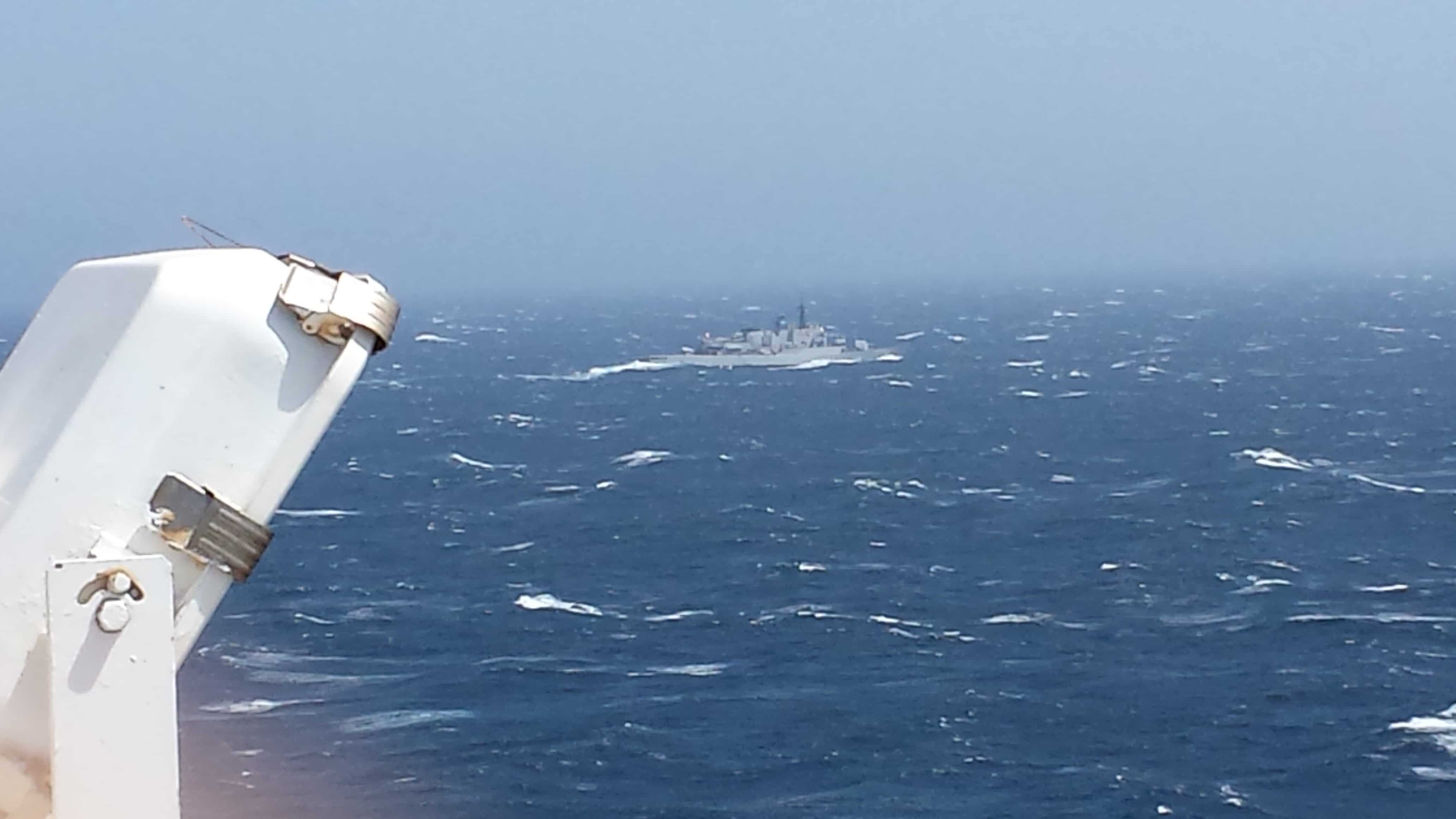 Everything anticipated our entry into what I can only call security seas. There are ships that do not send signals: they turn out to be warships of a sort, small, compact, going only at 7 knots with a marking of F571 their only distinguishing feature off the coast of Yemen. There is another ship that appears on the control room monitors; its name only “Coalition Warship” and it seems to be coming at us at high speed; again off the coast of Yemen; this one much closer to the coast and obviously showing its AIS (unlike F571) but even then, which coalition?  Which country?

Our fire drill today took us to the lifeboats, and climbing into it was a bit like climbing into a tomb.  Our lifeboat is far smaller than the one in Captain Philips and looks a bit more rudimentary.  Tomorrow as we pass into the Gulf of Aden, we will be closing and locking all of our deck entries, and will not be allowed to go outside.  Which is a bit of shame really, given that the 30 knot winds of today make it nearly impossible to be outside.  When I tried to go for my walk along the upper deck, at the bow, the wind was so strong that I had to hold on to metallic objects so that I would not be pushed hither and tither, and there was vast amounts of seawater washing on the deck, and even the windshields in the wheelroom are covered in sea-salt as the spray splashes up in momentary rainbows. 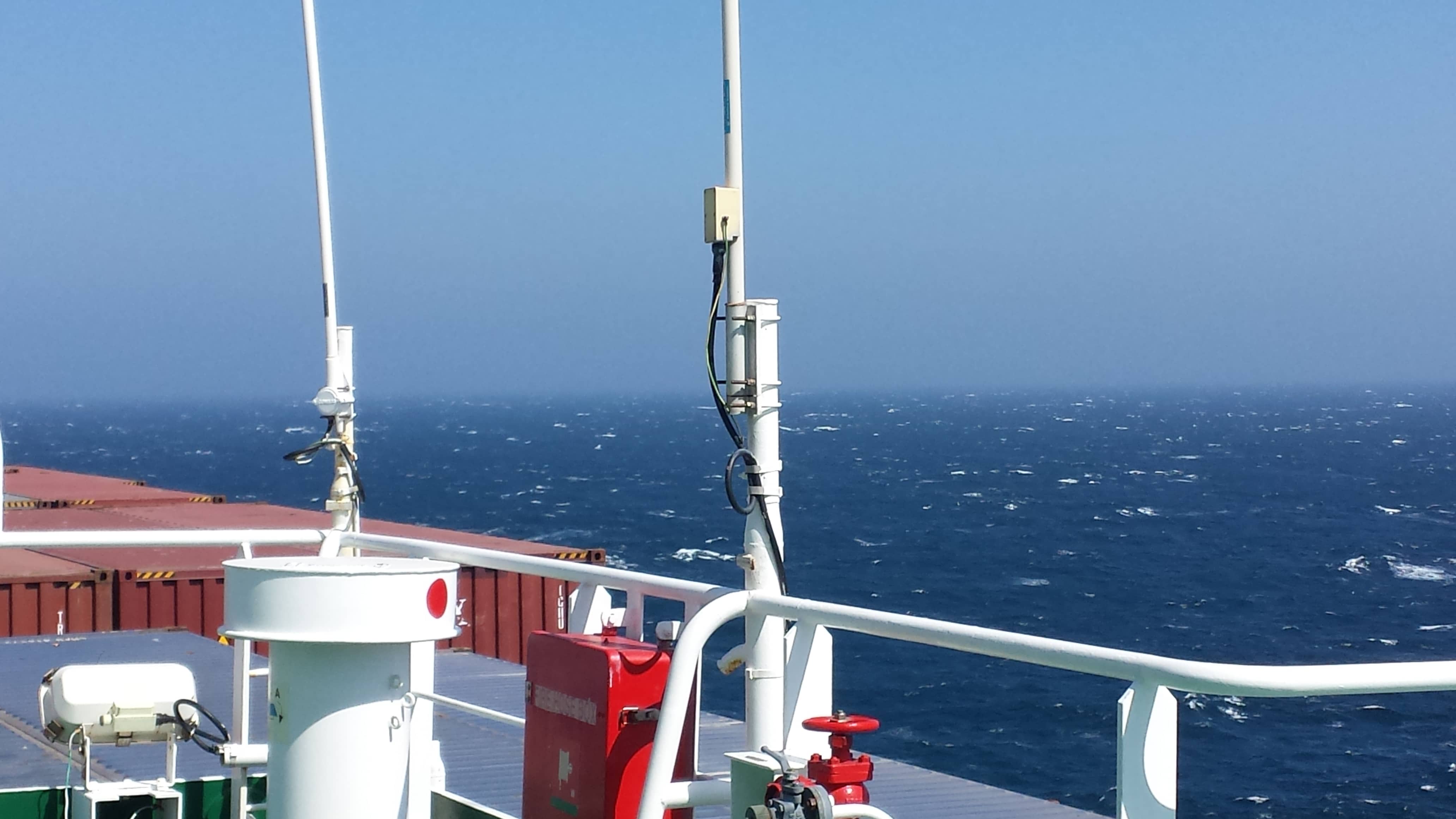 As we go further south and closer to the Bab Al-Mandab, stories about piracy end up increasing.  A Filipino able seaman on watch on the bridge talks about how in 2010, they frequently heard the distress calls of ships calling “under pirate attack.”  The targets were often tankers which have a lower frame and slower speed; some going as slow as only 12 knots, where pirate skiffs were going at 18 knots. When I mentioned Maersk Alabama, they said it was a smaller ship that only went as fast as 16 knots.  So, in strange ways, what I was reading in Sekula about the enforced slowness of travel on the sea is in some ways negated by the ever more powerful engines that can go as fast as 25 knots.  But back then, a lot of commercial ships would also travel in “shadow mode”: all navigation lights off; no AIS data even; and they would only be visible on the radar screens.  One of the ship’s officers said it was mostly MSC ships that followed this protocol.  Nowadays it seems to be the warships –of how many different nations? – that follow this strange routine: no flags; no AIS signals; just there, a ghostly presence, grey and anonymous on the radar screens, and then eventually visible to the eye, during the day anyway.

There are other things about piracy: the notice printed on a dot-matrix printer from the IMB Piracy Reporting Centre contains this bit:

Masters are reminded that fishermen in this region may try to protect their nets by attempting to aggressively approach merchant vessels. Some of the fishermen may be armed to protect their catch and they should not be confused with pirates.

The area is apparently patrolled on some sort of rota by naval ships of many nations, including India and China, and there is the Djibouti Navy (which I can only believe in with some difficulty) which calls upon different ships and asks them about their specifics.  Another ship’s officer seems to think that the US just blows the pirates away.  He asks (with some justification), “Have you ever heard of US capturing pirates?”  One of the Balkan officers thinks that the whole thing is a conspiracy between insurance companies and governments: “If NATO can bomb our entire country so nothing is left how can they not deal with a bunch of pirates with Kalashnikovs and RPGs?”  I didn’t much feel like giving a lesson on guerrilla or asymmetric warfare and the ability of small stealth fighters to get away with it.  Perhaps if there is no strange conspiracy between insurance companies, nevertheless shipping companies give directions to the ships about the routes they can choose which saves the shipping companies money by saving them the cost of fuel they would have spent on longer and safer routes.  The shorter routes also buythem delivery time – while also exposing their seafarers further to piracy by being too close to coasts.  In fact, my 14 day trip is going to be 13 or even 12 days long despite the delay in arrival in Malta because we have been steaming down the Red Sea at unbelievable speeds and despite the 30 knot headwinds and strong currents which slow us down a bit (by about 2.5 hours in a day, I would say based on yesterday’s estimate of when we would arrive in Bab al-Mandab and when we actually arrived today) [in the end because of anchoring at sea outside Jabal Ali and slowing down, this turned out not to be true]. 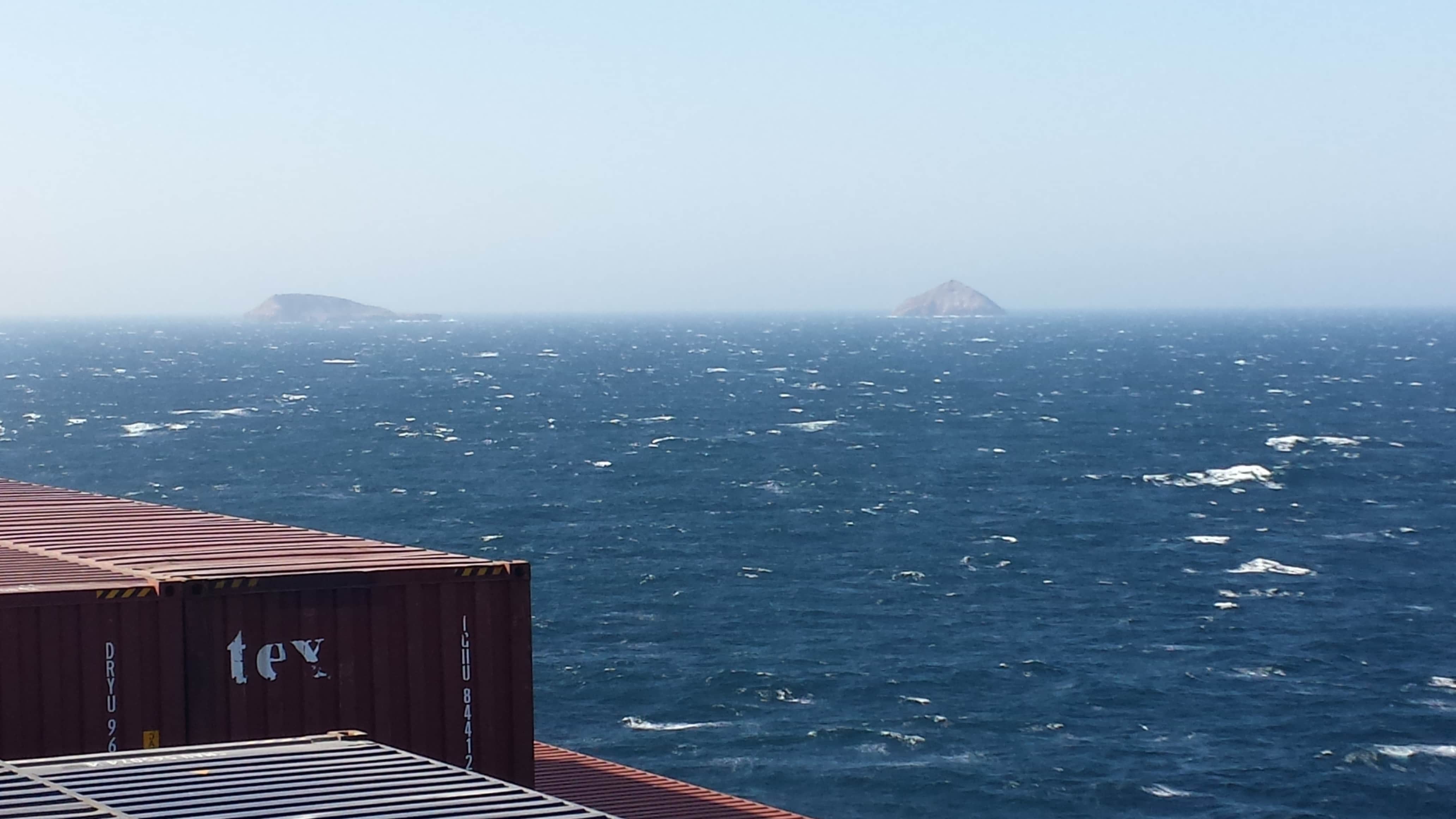 As we move forward through the narrows towards the Gulf of Aden, we listen to the conversations between the Djibouti Navy and the passing ships (as between Port Said Port Control and later Jeddah Port Control and passing ships); one’s imagination can weave so many stories about the people passing through the night.  One particular conversation took place between a woman chief officer on a container-ship flagged to Liberia and with 22 crew members going to the Isthmus in Turkey. I couldn’t tell where her accent was from; or which ship she was officering. But she was there in the darkness steaming away from us. I could have sat in that control room and listened to these conversations endlessly (some conducted in variously accented Arabic) and have imagined the lives passing by on enormous steel vessels in the darkness. 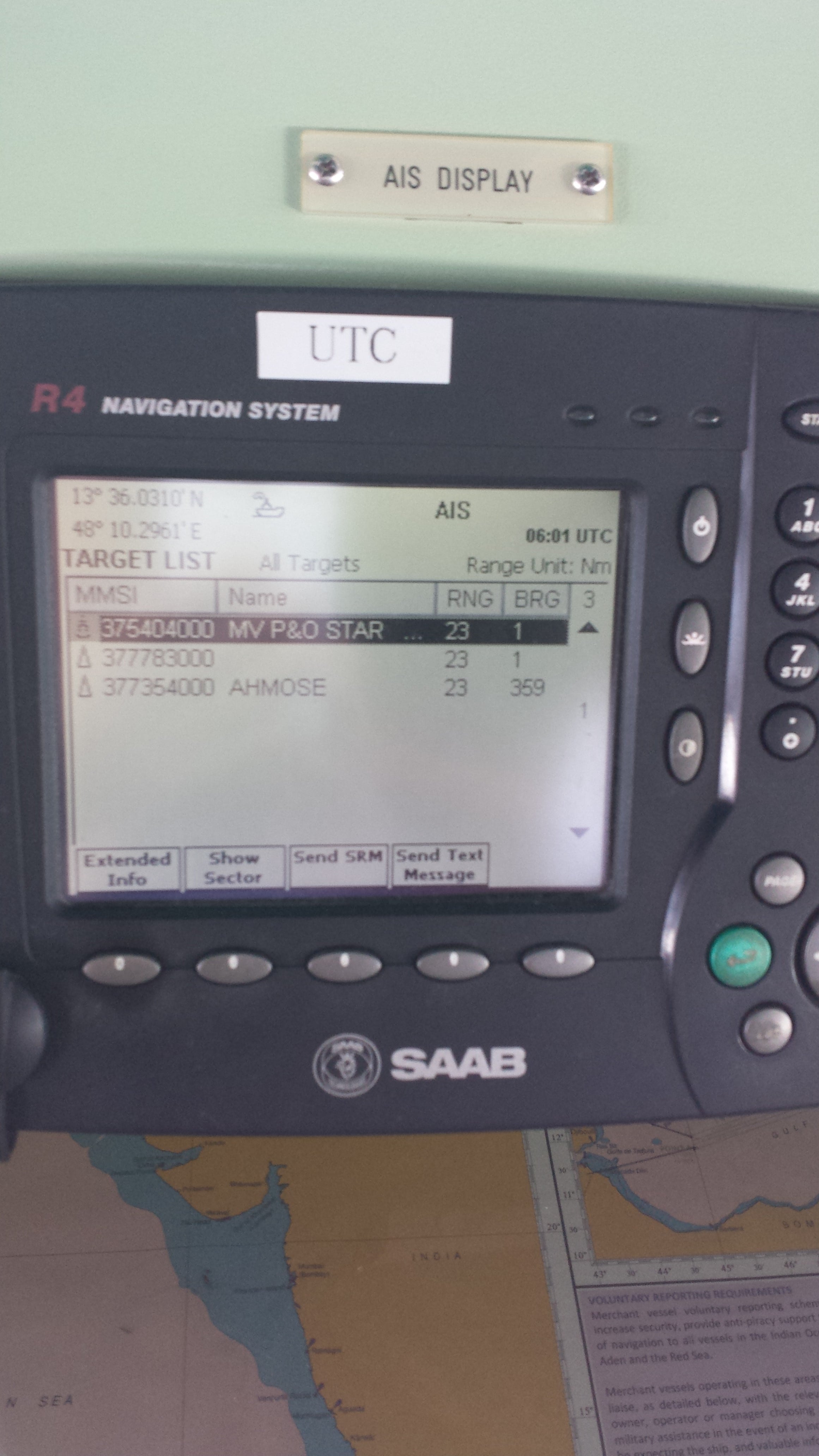 Very few ships on the AIS screen.. only to grow even sparser as the day goes on

It is an incredibly lonely sea today, especially in contrast with yesterday’s crossing through Bab al-Mandab and the intensity of that traffic, both visible and in range of the AIS all the way beyond 300 nautical miles.  Today, at most 3 or 4 ships show up on the AIS monitor (2 of them P&O ships, one of them called after Balqis the Yemeni queen Suleiman loved in love fables with which I grew up), none beyond the range of a few dozen miles. 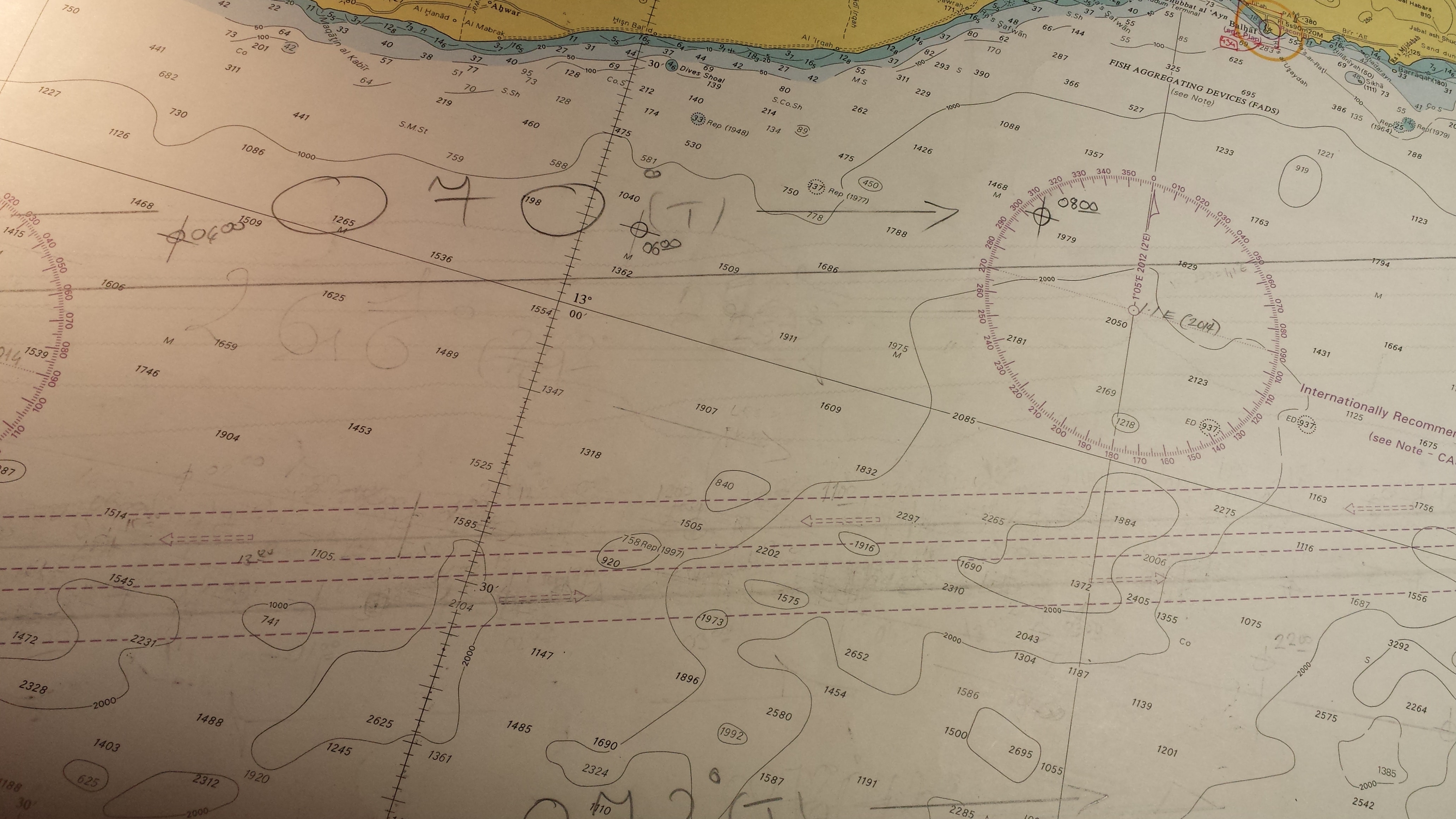 Instead, we are hugging close to the Yemen coast, which is visible by sight and without binoculars.  We have passed Ra’s al-Kalb and are approaching Mukallah, A rather beautiful barren sight, sand dunes and black hills rising out of the dunes and the sea, and an occasional crag of a mountain rising behind them. 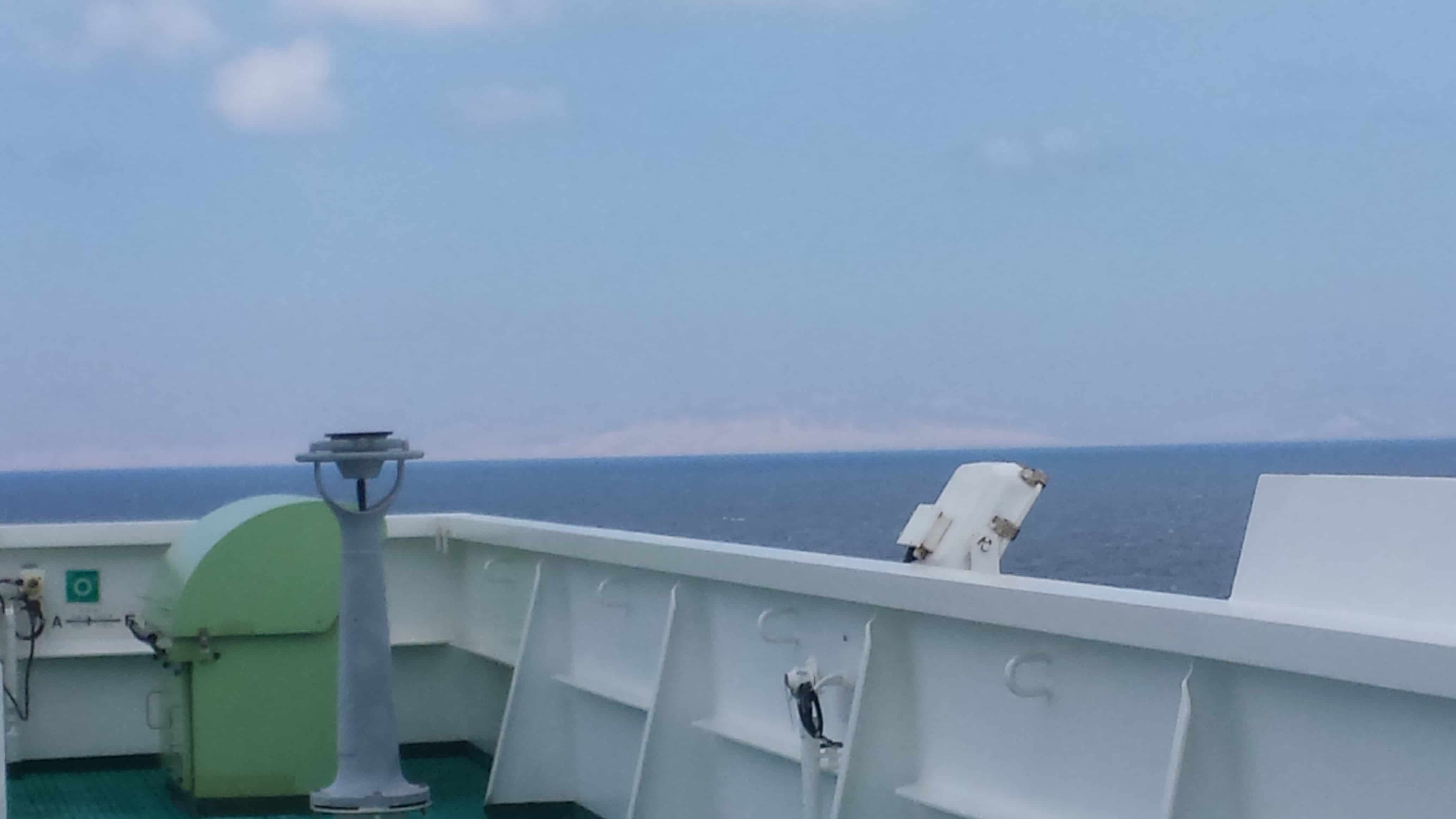 Yemeni sand dunes in the distance

The captain has just permitted me to go outside in the sun, though it looks still too windy to go for a walk on the upper deck, but at least now, I can go out and sit in the sun, once the deck cleaning above us –and the flood of dirty water being washed off- has subsided. 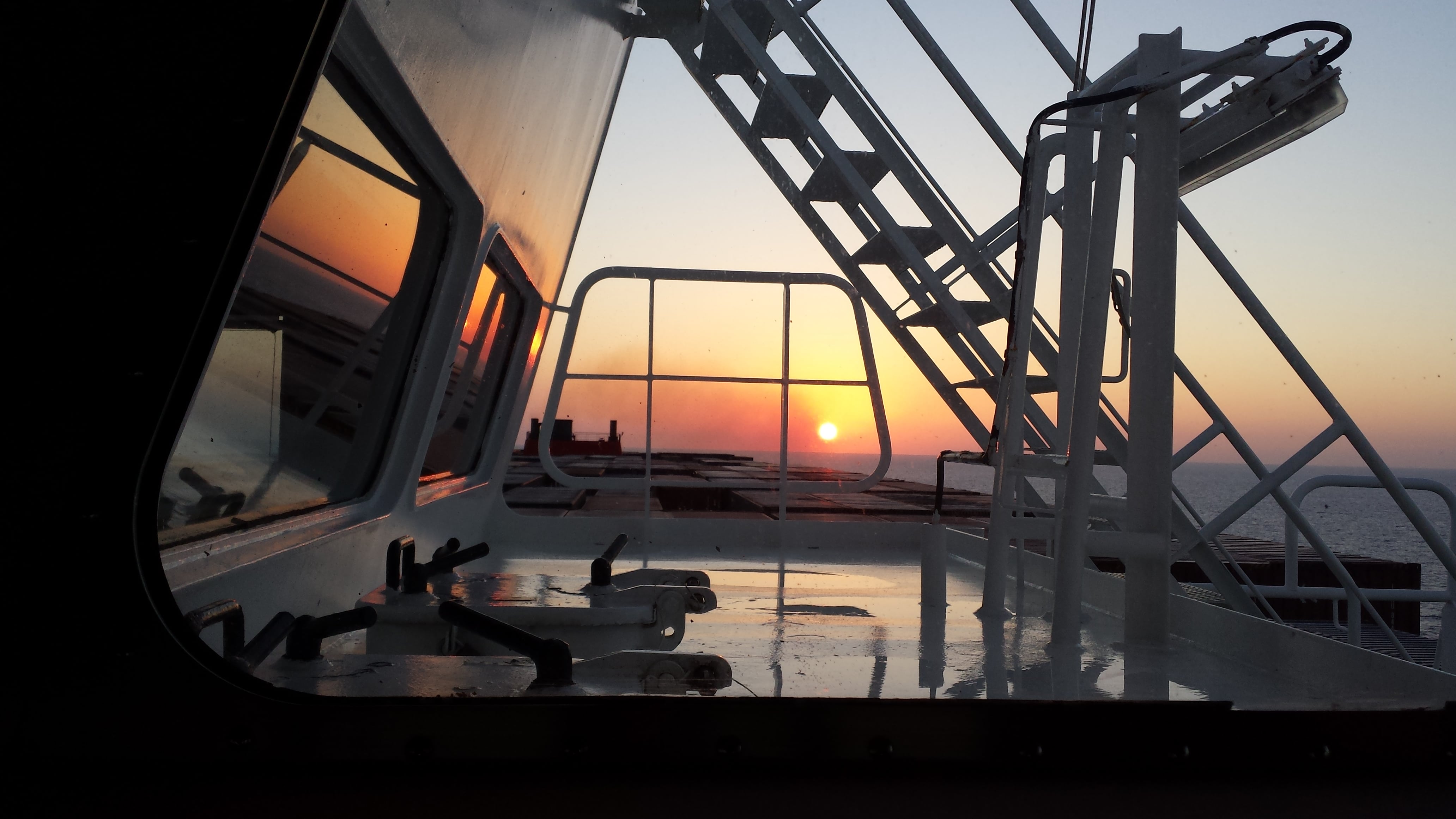 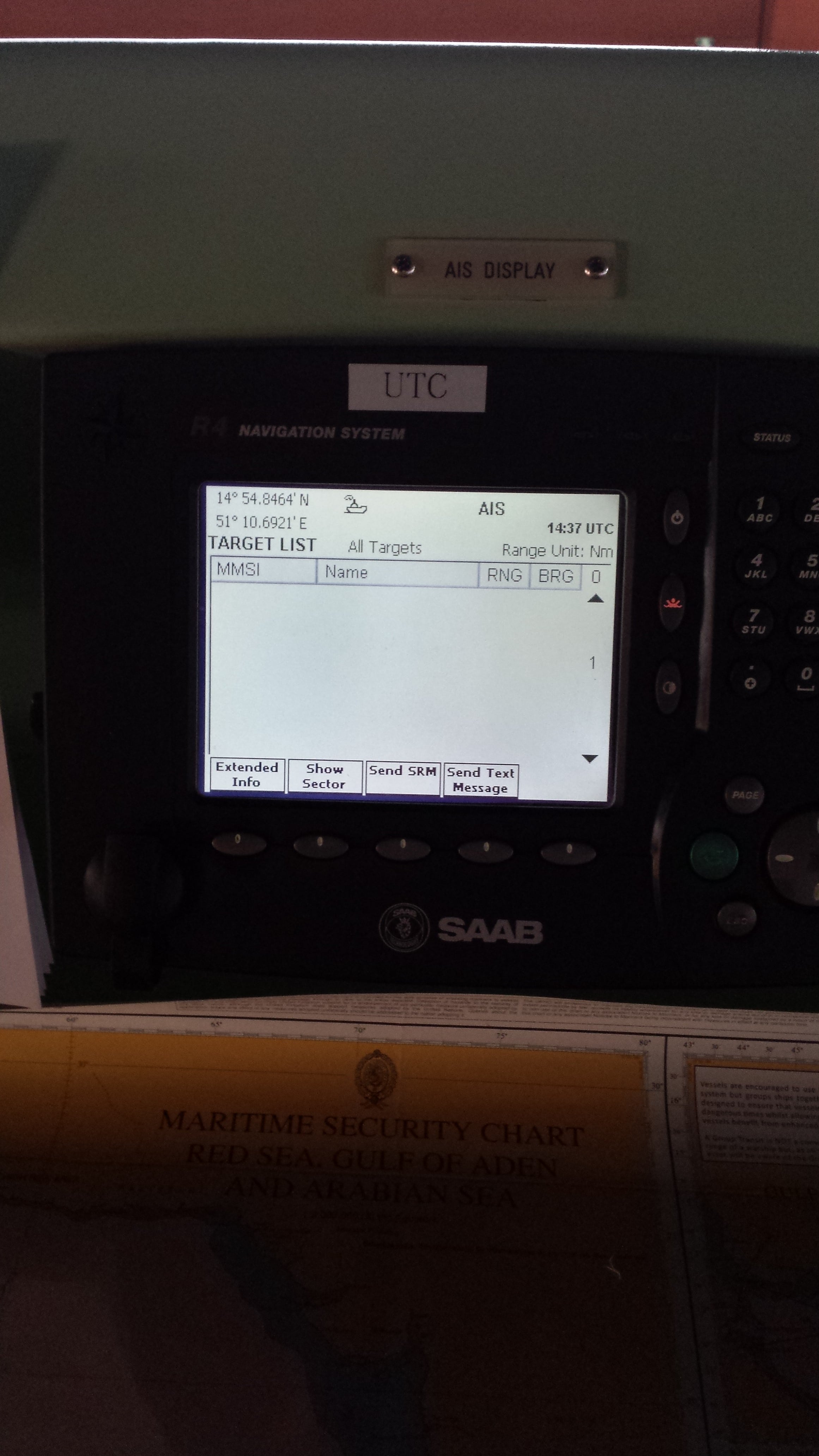 A little bit of excitement at just before 18.00 and sunset, when the very sharp eyes of the Filipino able seaman on watch catches a bit of white on the surface of the sea on the port side.  We look and when the radar is made more sensitive to notice it, sure enough, it is a little white skiff going at about the same speed as us, but speeding towards the coast.  At the same moment we see two other skiffs on our starboard, again speeding towards us.  Of course, they turned out to be nothing but perhaps fishing boats.  The experience was interesting in two ways though: first, that the seafarers have learned to see in in ways that I am obviously not skilled at all.  That the able seaman could pick up the skiffs from the waves and without the aid of the radar shows ways of seeing which only develop through long experience.  These embodied or corporeal skills are rather fabulously interesting because it is training eyes for example to do things that ordinary eyes cannot do.  Must be like trackers who can smell, hear, see things other people’s senses are not attuned to.

The second interesting tidbit was what my cadet friend mentioned: that often these fishing boats know that the big ships are apprehensive about pirates and so the fishing boats “play” with them, play on their fears.  It seems like a rather dangerous game, given that some shipping companies (apparently Russians and Israelis especially) have armed guards on board, but it also says something about relations on the sea and the ways in which the tedium on work on the water is relieved.