In one of the most significant environmental decisions the Trump administration has taken, a ban on offshore drilling was lifted on 4 January 2018.  The New York Times reported:

While the plan puts the administration squarely on the side of the energy industry and against environmental groups, it also puts the White House at odds with a number of coastal states that oppose offshore drilling. Some of those states are led by Republicans, like Gov. Rick Scott of Florida, where the tourism industry was hit hard by the Deepwater Horizon rig disaster in 2010 that killed 11 people and spilled millions of gallons of oil into the Gulf of Mexico. […]

It would be fascinating to see what sorts of controversies and contentions between the states and the federal government may emerge after this decision. Interestingly the designation of “continental shelf” as a legal maritime category emerged in mid-20th century precisely out of such a controversy over whether the states or the federal US government had the right and control of the subsea resources contiguous with a given state.

In September 1945, Harry Truman issued an executive order to declare that the US federal territory extended to the edge of its continental shelf – in order to ensure that the US could drill for oil and gas beneath the sea undeterred. Executive Order 9633, specifically stated that

Only a couple of years after this declaration, the Federal government had to take the state of California to court,

to determine which government owns, or has paramount rights in and power over, the submerged land off the coast of California between the low water mark and the three-mile limit and has a superior right to take or authorize the taking of the vast quantities of oil and gas underneath that land (much of which has already been, and more of which is about to be, taken by or under authority of the State).

As Justice Black wrote in his summary of the case, California, “acting pursuant to state statutes but without authority from the United States, has negotiated and executed numerous leases with persons and corporations purporting to authorize them to enter upon the described ocean area to take petroleum, gas, and other mineral deposits, and that the lessees have done so, paying to California large sums of money in rents and royalties for the petroleum products taken.”

Notably, in deciding the case for the Federal government, the Supreme Court judges invoked the sovereignty of the United States among the family of nations, and even more remarkably, the centrality of security concerns (“protect[ing] this country against dangers to the security and tranquility of its people”). 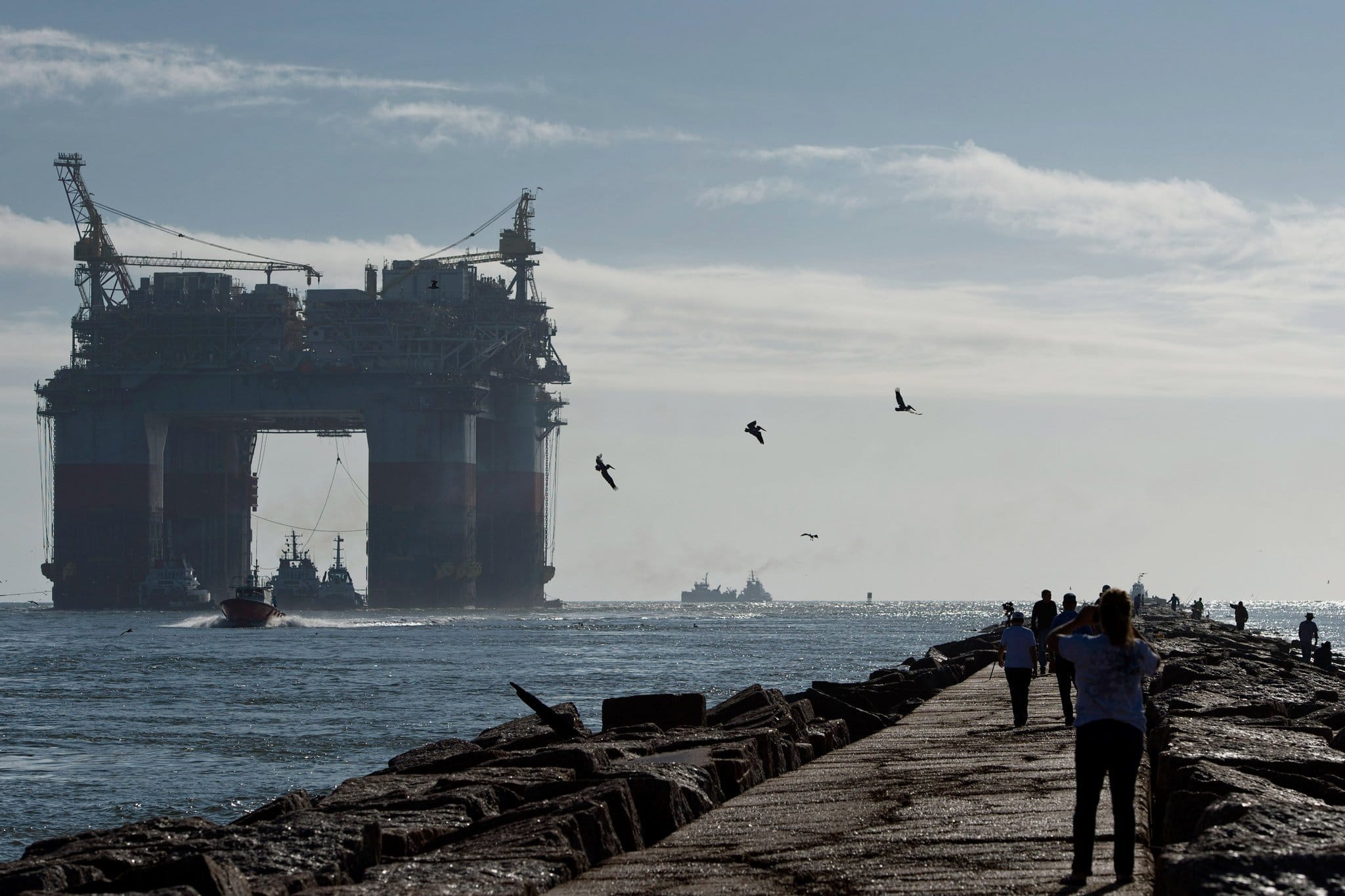 Tugboats pulled a Chevron drilling platform toward the Gulf of Mexico in 2013. The Trump administration said Thursday it would open most of the country’s offshore waters to oil and gas drilling.CreditEddie Seal/Bloomberg, via Getty Images

Court decisions were consolidated via legislation when in 1953, the US Congress enacted the Submerged Lands Act which gave the control of the continental shelf to the federal government (the above act has now been subsumed into the Outer Continental Shelf Act) and was slightly modified by the Energy Policy Act of 2005, which, inter alia, set up a fund for oil spills and passed on some of the profits from the lease of the subsea resources to the coastal states.

Of course all of this has to be seen in light of the Deepwater Horizon disaster of 2010 which led to an immediate moratorium on drilling in the oceans (lasting only a few months), and eventually to the decision made in the last few weeks of Obama’s time in office to ban these offshore drilling licenses in the Atlantic and in the Arctic.

As the New York Times article reports, the Trump administration repeal of the ban on offshore drilling is part of a larger GOP plan to roll back even the most anaemic environmental legislation in order to facilitate further mineral exploration:

Last month Congress opened the Arctic National Wildlife Refuge, or ANWR, to oil and gas drilling as part of the tax overhaul. And last week the Interior Department rescinded an Obama-era rule that would have added regulations for hydraulic fracturing, or fracking, on federal and tribal lands. It also repealed offshore drilling safety regulations that were put in place after the Deepwater Horizon spill.

Whether there will be takers for the new Atlantic offshore licenses, however, remains to be seen. The low price of oil is a concern for the oil companies wanting to make investments in capital-intensive exploration.  However, people who see the expansion of petroleum exploration and opening up of new fields as a form of “energy independence” for the US (really a nativist fantasy) may want to pay attention to who the investors in the new oil exploration ventures (and especially fracking operations) are.  Forbes reported in September 2016 that Saudi Arabia has been buying into refineries in the US (like many other Gulf countries), while in December 2017, the Wall Street Journal reported that Saudi Arabia was looking to invest in US shale oil (and fracking). Of course the US oil industry, both upstream and downstream, is fully internationalised, so it is not at all surprising that the Saudis, like Qataris, Kuwaitis, the British, Dutch, Chinese and others have invested in these industries. But it is possible that if there is a legal fight coming over offshore exploration licenses, the players may end up being more and other than the states and federal government, I suspect.