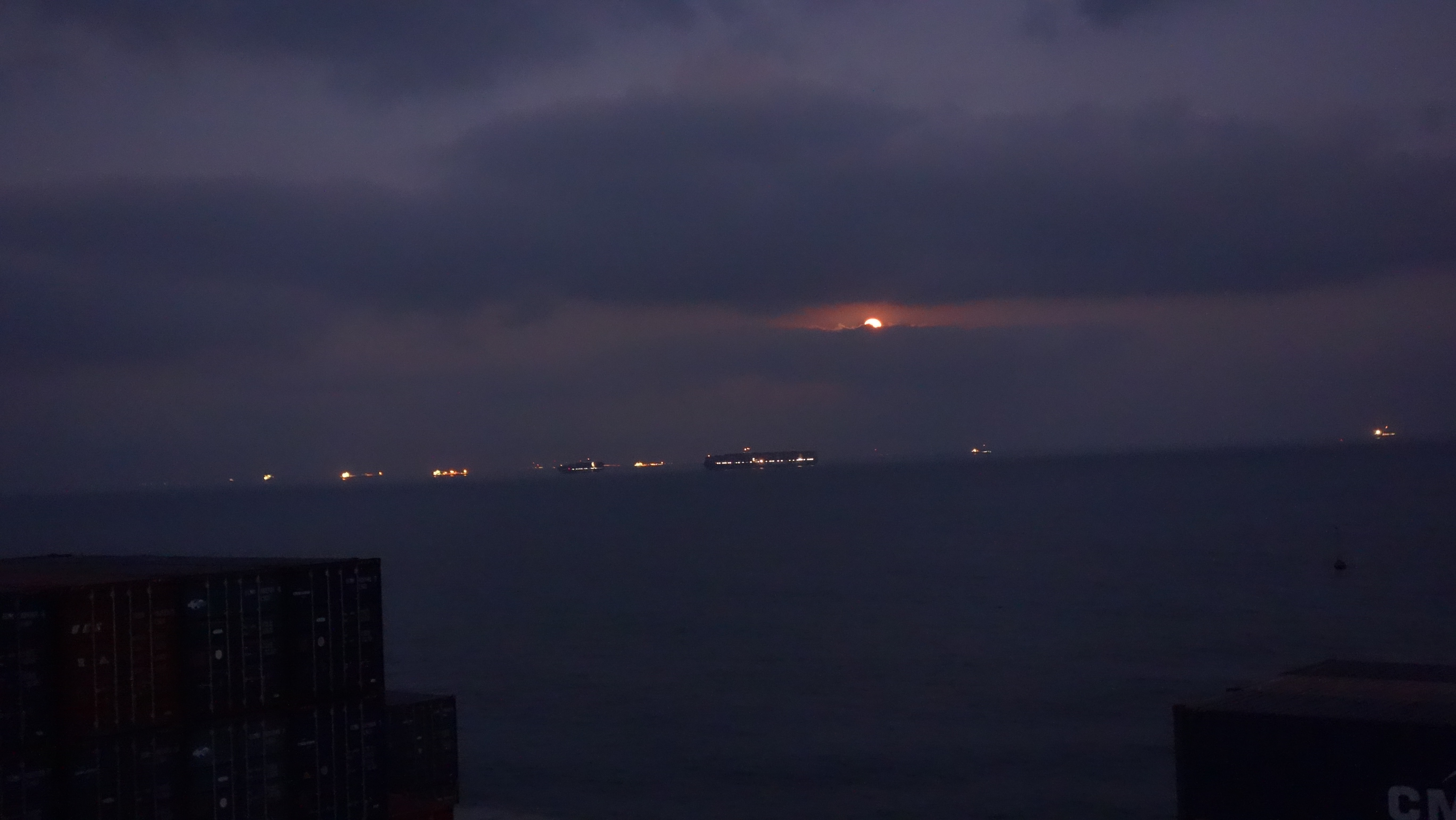 I was so excited last night I could barely sleep. Woke up several times between 02.00 and 04.30 when I finally got up. Turned out we were already steaming – and were/are the first ship in the convoy. It was rather majestic, that slow stately procession of ships, with the ships snaking through the channels to get in convoy. Since I was sick last time and my good camera had failed, I was really anxious this time to be there for the entry and will continue to be so… Last year, I only woke up –completely virus-ridden– when we were in Lake Temsah. This time, I got to see the sunrise over the Port Said bypass, and even see a little train go by the canal. This bit of the canal – at least on the Africa side is far less militarised than further south. And it is so green… 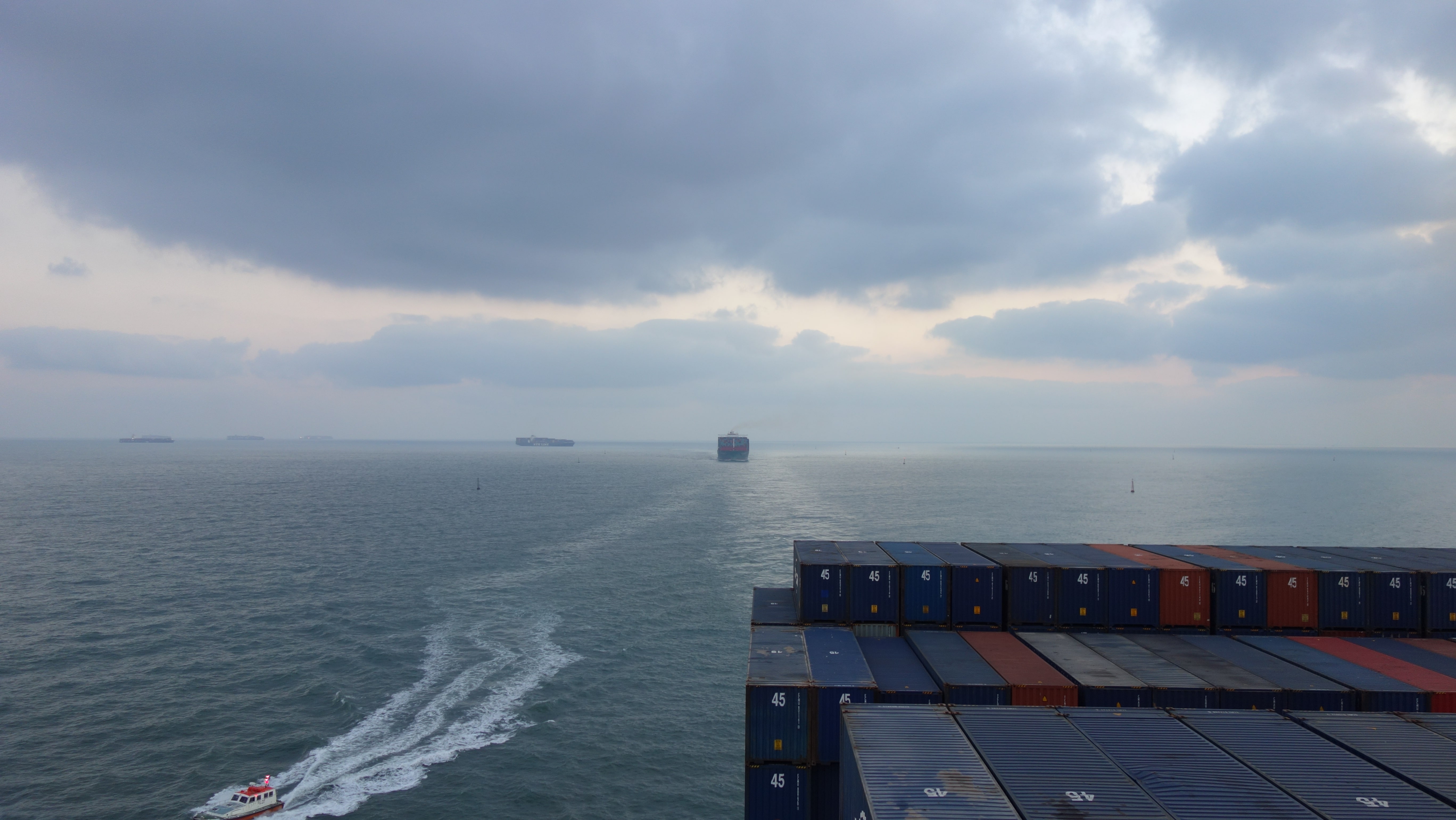 The second canal is up and running. As last time the two banks are a study in contrast: Sinai dry and bone-coloured; the African coast lush and green. Baladi dogs; fishermen who take their lives in their hands by moving in front of the massive ships, and a massive construction project that seems to have come off. 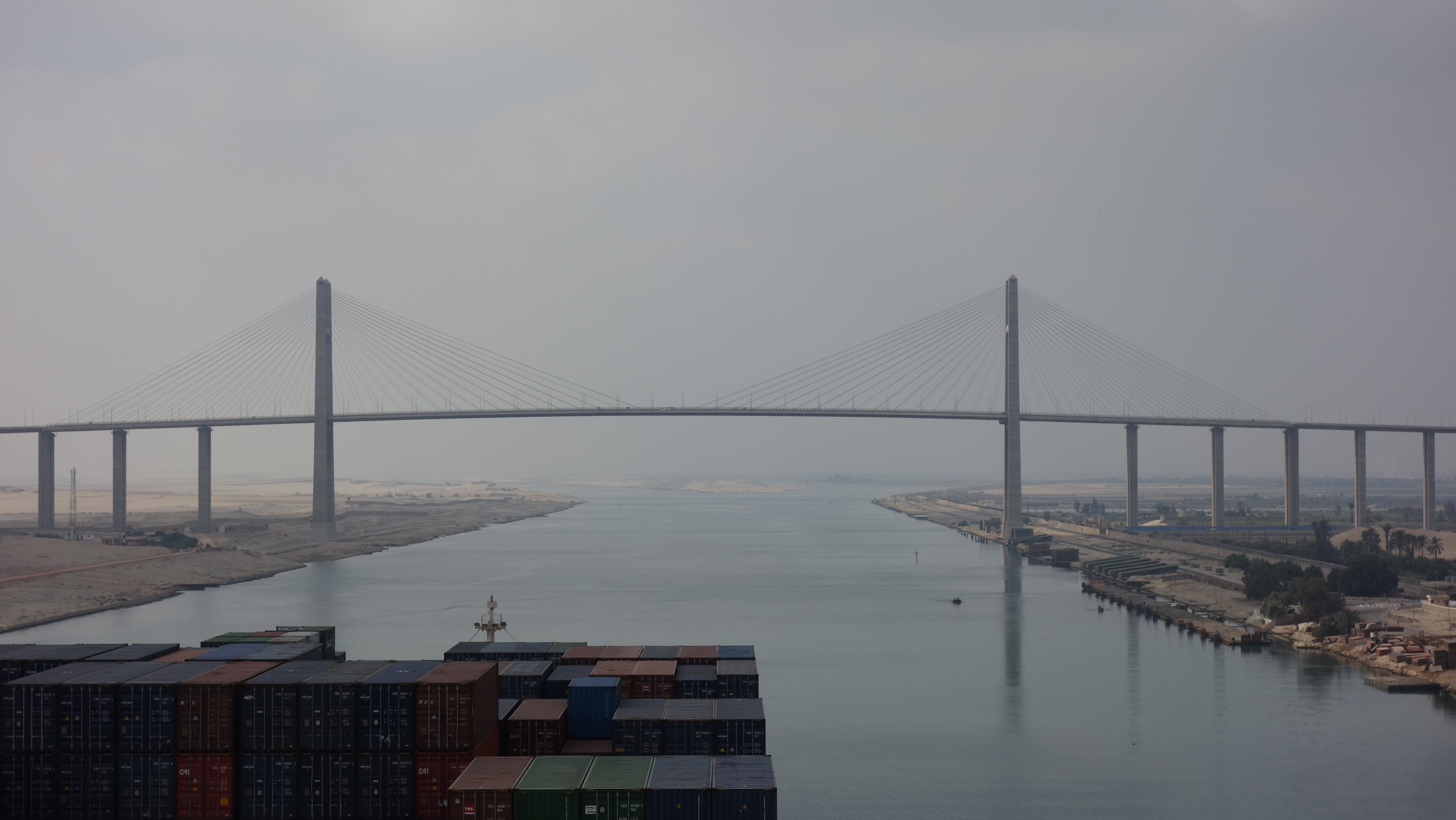 Now though, there are two convoys going side-by-side between Km122 and Km52. Reduced anchorage time in the Great Bitter Lake (by 4-6 hours) and deeper channels (up to 66ft) remove the necessity of anchoring in the Lake, and are apparently the advantages of the new canal. A two-way canal system means that the image from Lawrence of Arabia – of a ship traversing the desert can now be observed in two directions and from onboard one ship as well. 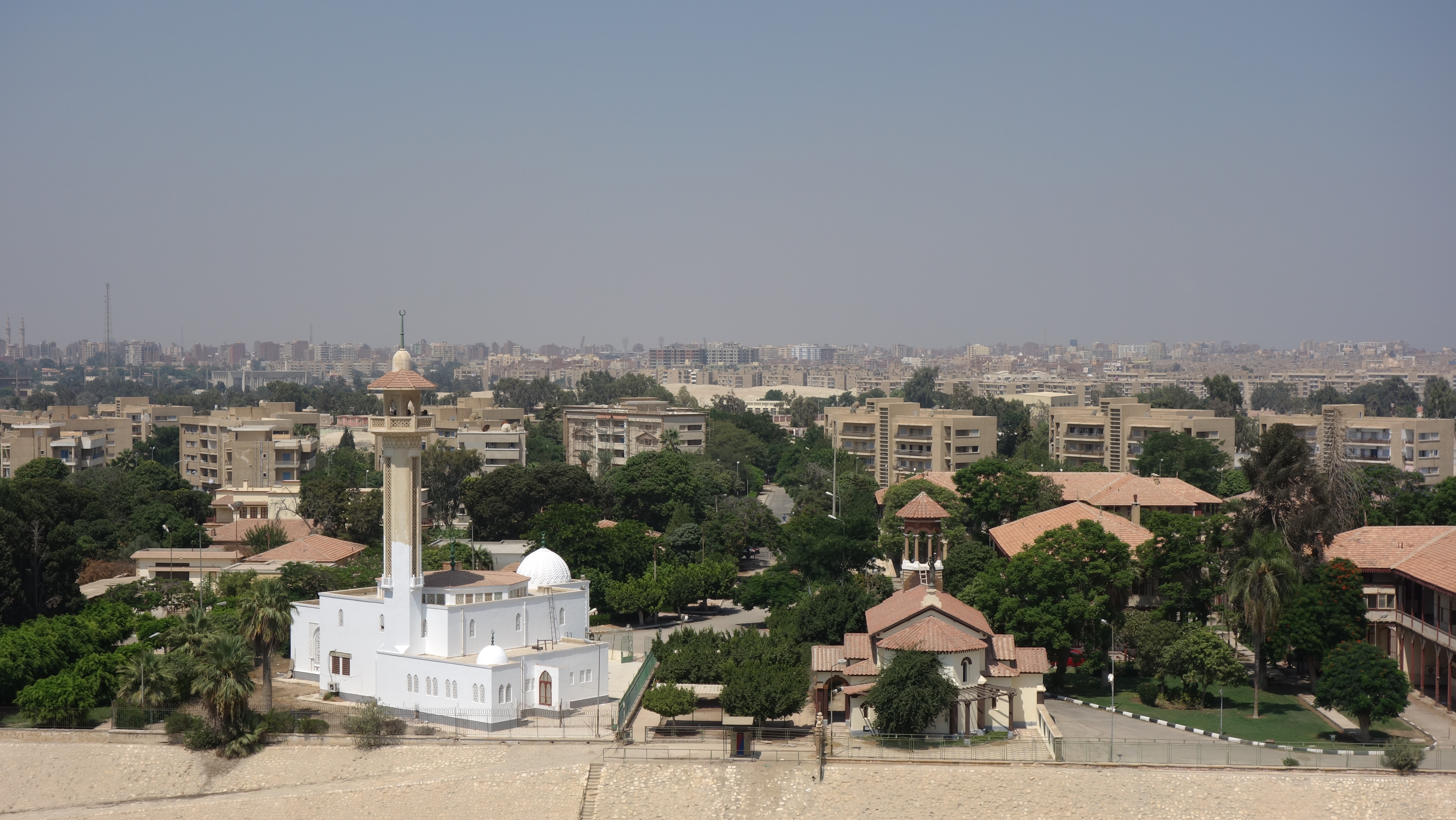 As a whole the canal seems to me less militarised than last time, but thus far I have seen the Northern part, which I had missed last time because of both night transit and my illness (and my camera breakdown).

The other striking thing is how few tankers are coming from the other side, and how few chemical carriers there are on our side. I wonder if it is true that tankers are finding it cheaper to go around the Cape of Good Hope instead of paying Suez Canal fees – especially now that oil prices are so low. 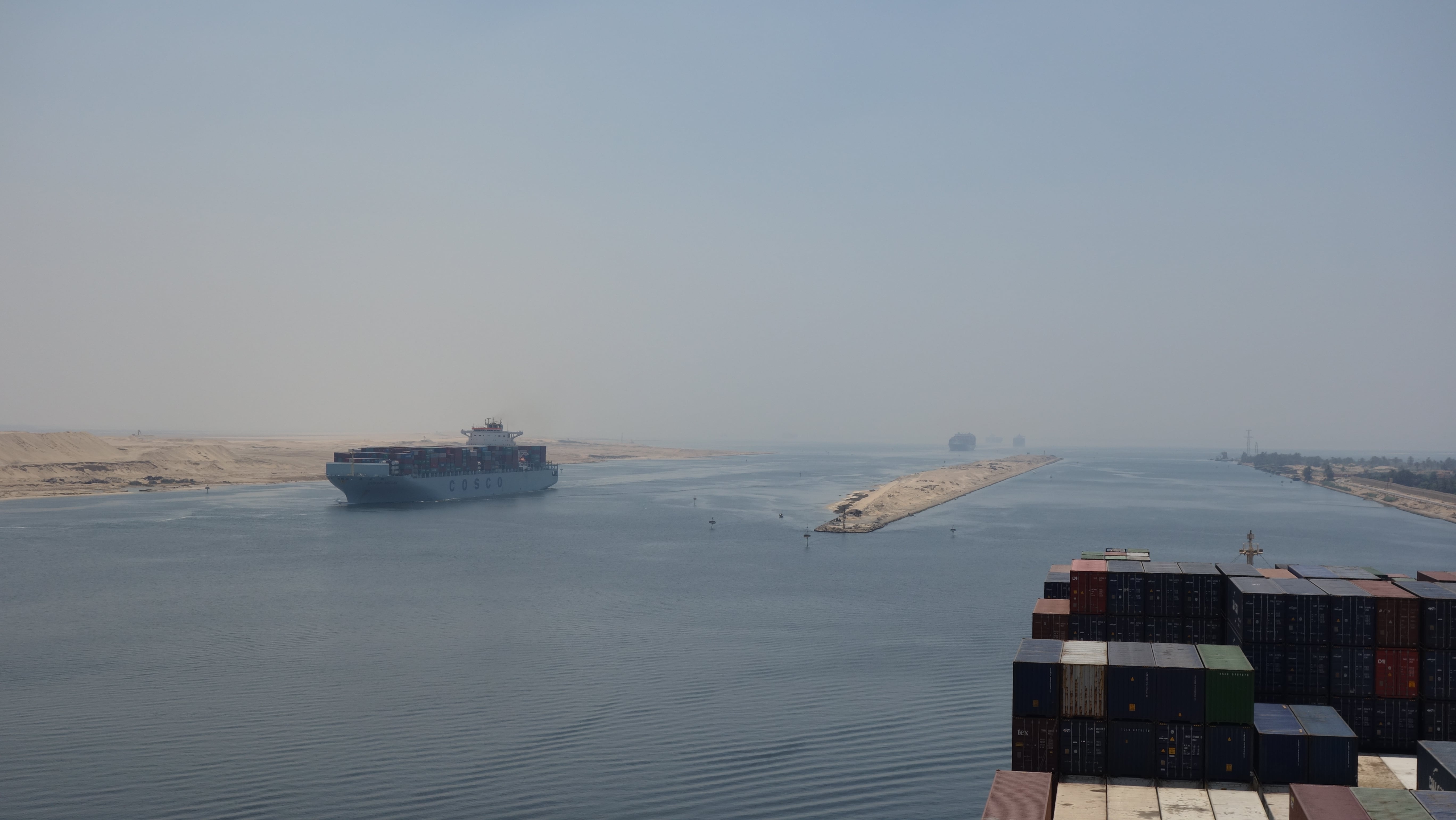 We have steamed past the wind-farm between Ain Sukhna and Ain Daraja. And at Ain Daraja, the most extraordinary yellow plumes of pollution arise out of the sea (and wellheads). The contrast between the wind-farms and the strange barrack-like buildings on the shore and this polluted sky. 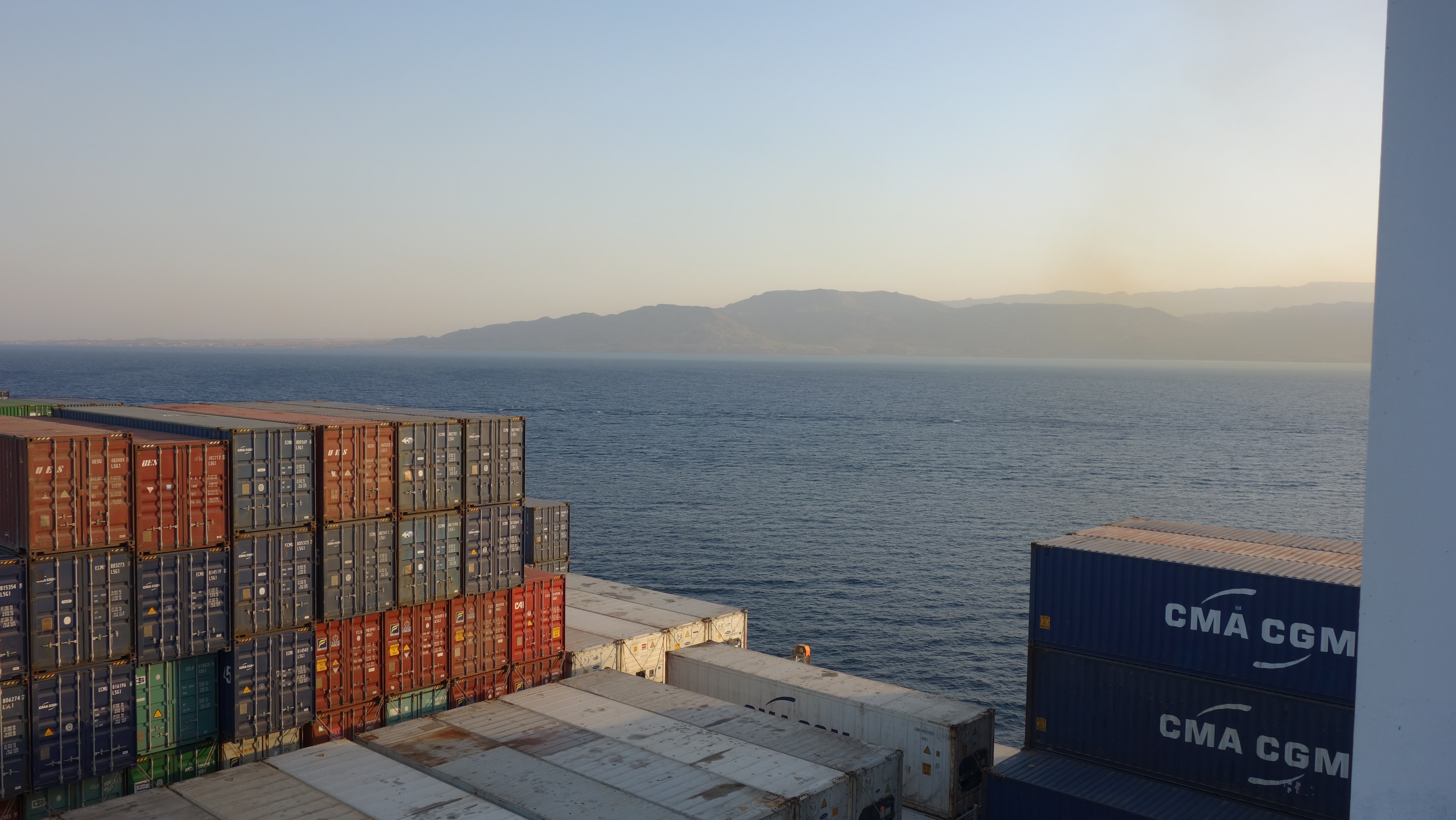 The moon is a full moon tonight and it is bright orange. It is such a shame that the bigness of the moon is always so difficult to capture with ordinary cameras.

We are now steaming south at a fairly leisurely pace (around 11 knots) and will probably drop our speed, since we are not expected in Jidda until noon on the 20th (another 40 hours). Other containerships are passing us at a much faster clip. Interestingly, the CMA CGM ship that was northbound, passing us a few minutes ago was even emptier than our ship. I wonder how they make do and if like Maersk they are suffering, but unlike Maersk they are unwilling to admit it. 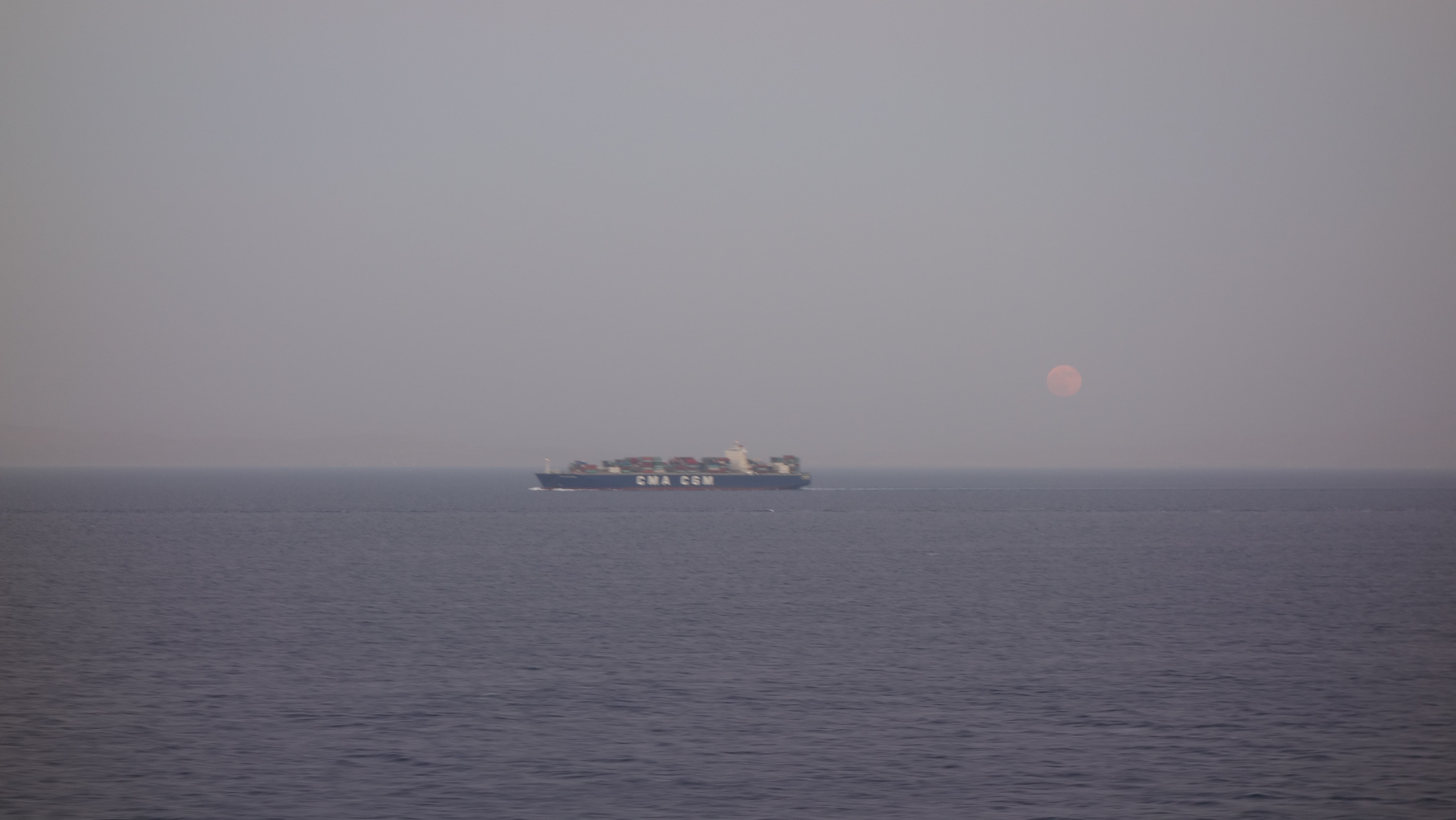