Playing with trains in the sand: reflections on the MENA Cargo show

Having spent the last couple of years researching Private Military and Security Companies (PMSCs), attending their industry gatherings and military expos, I was very excited to shift gears to a new project and curious what differences I would find in the world of Middle East logistics.  On 17-18 March I attended the Middle East and North Africa Cargo show purported to be “the biggest logistics and transport infrastructure event in the Middle East and North Africa”. It was held in one of the massive halls in the Dubai World Trade Centre and organised in partnership with the United Arab Emirates National Transport Authority with a tag line of “improving efficiency and supply chain management for cargo owners and movers”.

The Cargo Show was co-located with the Middle East rail exhibition, thus a main focus was on the boom in rail and metro construction across the Gulf Cooperation Council (GCC).  Aside from passenger metro line construction across the GCC, a major railway project is underway meant to link 6 countries of the GCC running from Kuwait to Oman. At the moment GCC states are independently developing their sections of the rail line (at different stages), but roundtables with government spokespeople at the Cargo Show emphasized that negotiations at the GCC level about harmonizing borders and customs are finalized and will be managed to ensure “efficient” transport. The rail line does not stand alone of course, but is connected to both ports and airports ensuring “seamless logistics” flows throughout the region. There is much to be said for studying the state of GCC integration through the logistics sector.

Like most corporate exhibits, the overpowering lights and studied smiles are difficult to adjust to. The first thing that struck me when entering the exhibition hall was how this could have easily been a military companies exhibition. 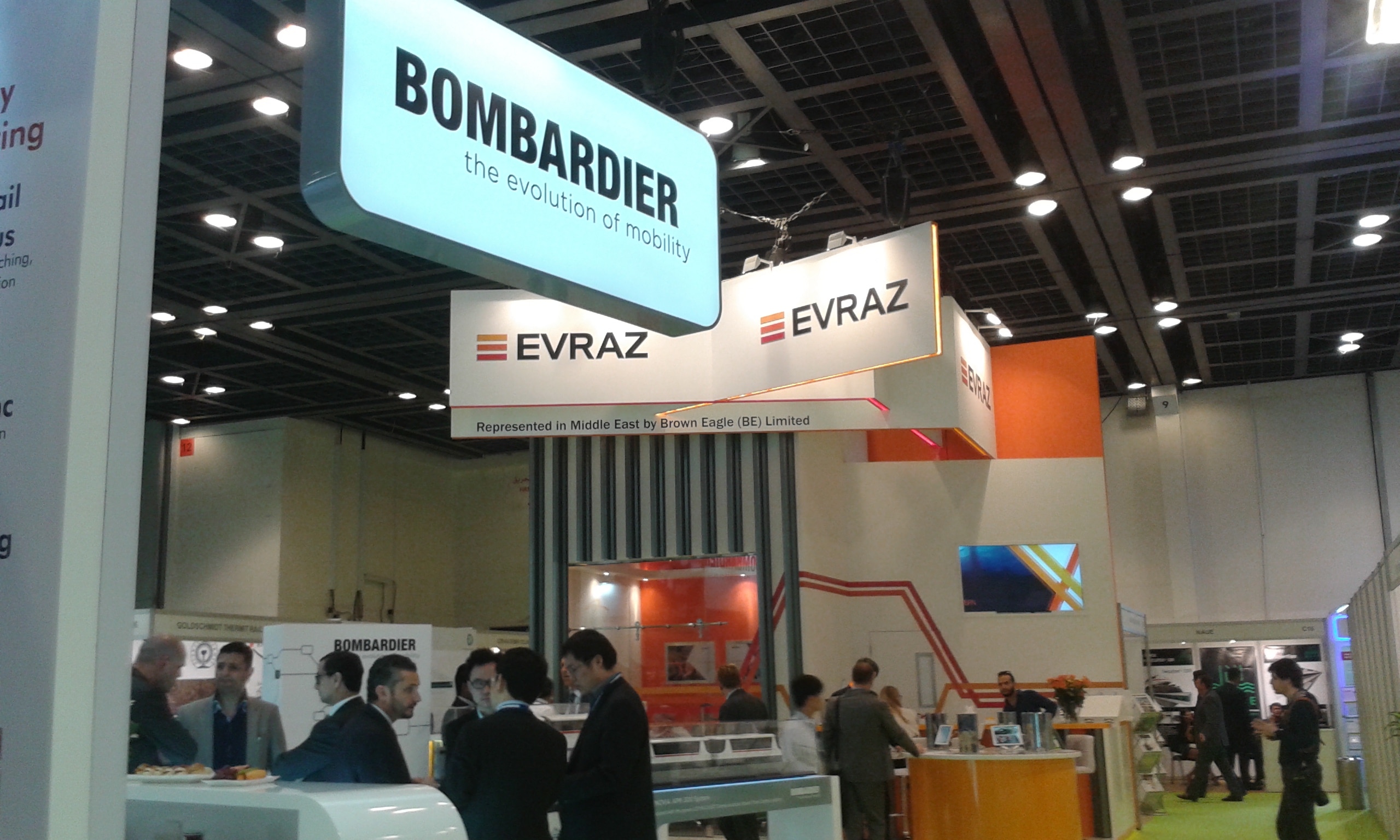 The familiar names were all there: Thales, Bombardier and Serco, but rather than model military equipment, the models were of trains.  Surveillance and tracking equipment featured heavily in a number of the stalls with an emphasis on keeping freight and passenger safety. One company explained how it had provided the Chicago Transit Authority with “IP video transmission, management, recording and storage system that allows operators to view and control cameras during daily operations”.

PMSC exhibitions always boast images glorifying the contractors themselves, in full military gear peering out in self –assured confidence ready to take aim. In contrast, this logistics conference featured very few human images, apart from those of masses of passengers. Portrayal of labour was entirely absent – despite the fact that thousands of workers will be involved in laying hundreds of kilometres of rail track in mainly desert areas. Not a single session of the 20 I attended mentioned who would build the tracks or who would maintain them. The two recruitment companies present were looking for high skill management positions “mainly from Europe” the young man at the stall told me. This was a world of machinery and navy blue executive suits. 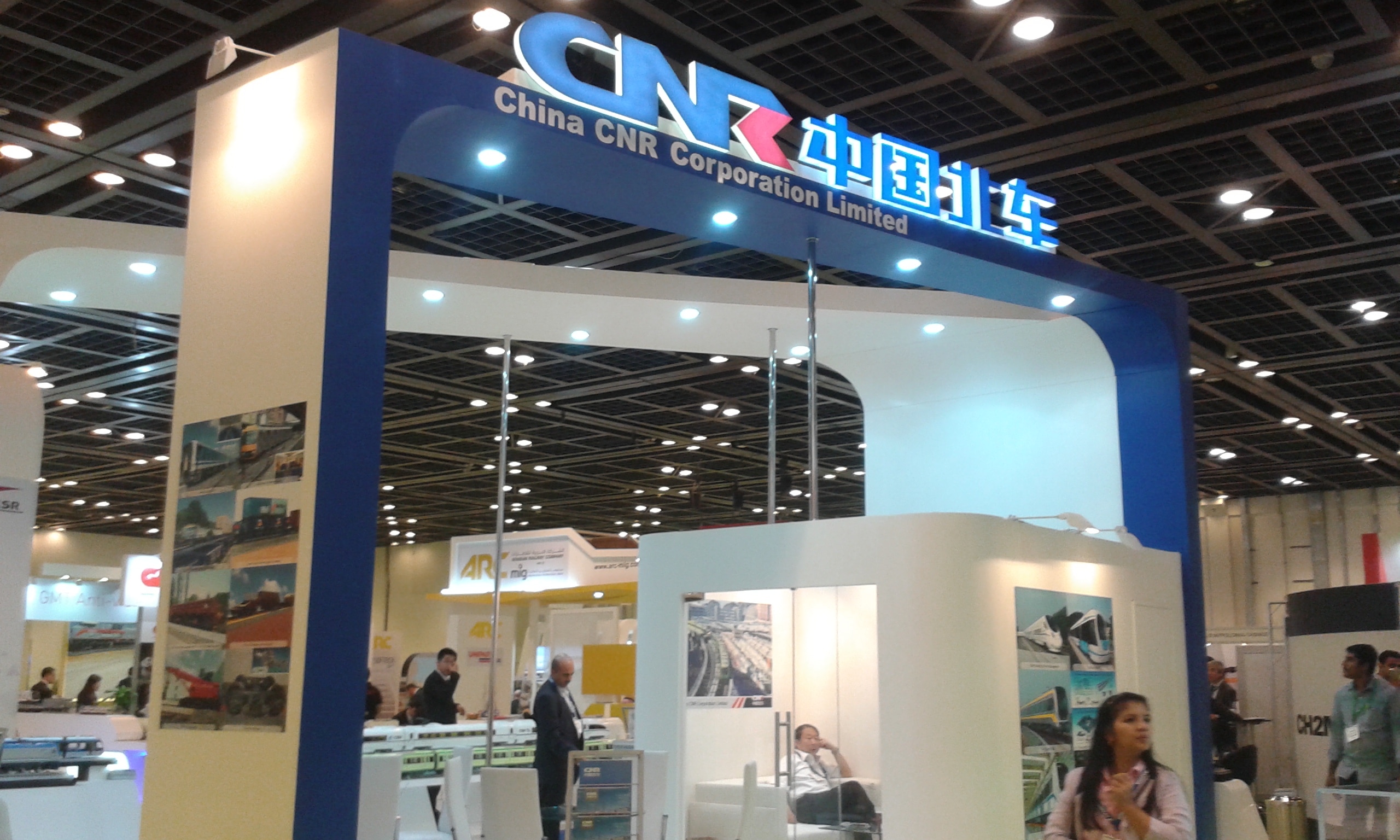 But the machinery certainly had a nationality. The British stalls were the most emphatic about showing it off with big Union Jacks and Great Britain emblazed everywhere. Other European countries like Italy and Spain were more discrete in the imagery, but their talks emphasized the origin and repeatedly stressed “quality of our products” while casually pointing to the Chinese company stalls. While the larger US brands emphasized their efficiency, the European brands emphasized their legacy in “having rail for very long”. It truly felt like a microcosm of international political economy: all international corporations ready to cash in, Chinese companies solidly competing, Spain and Italy wanting a piece of the pie. 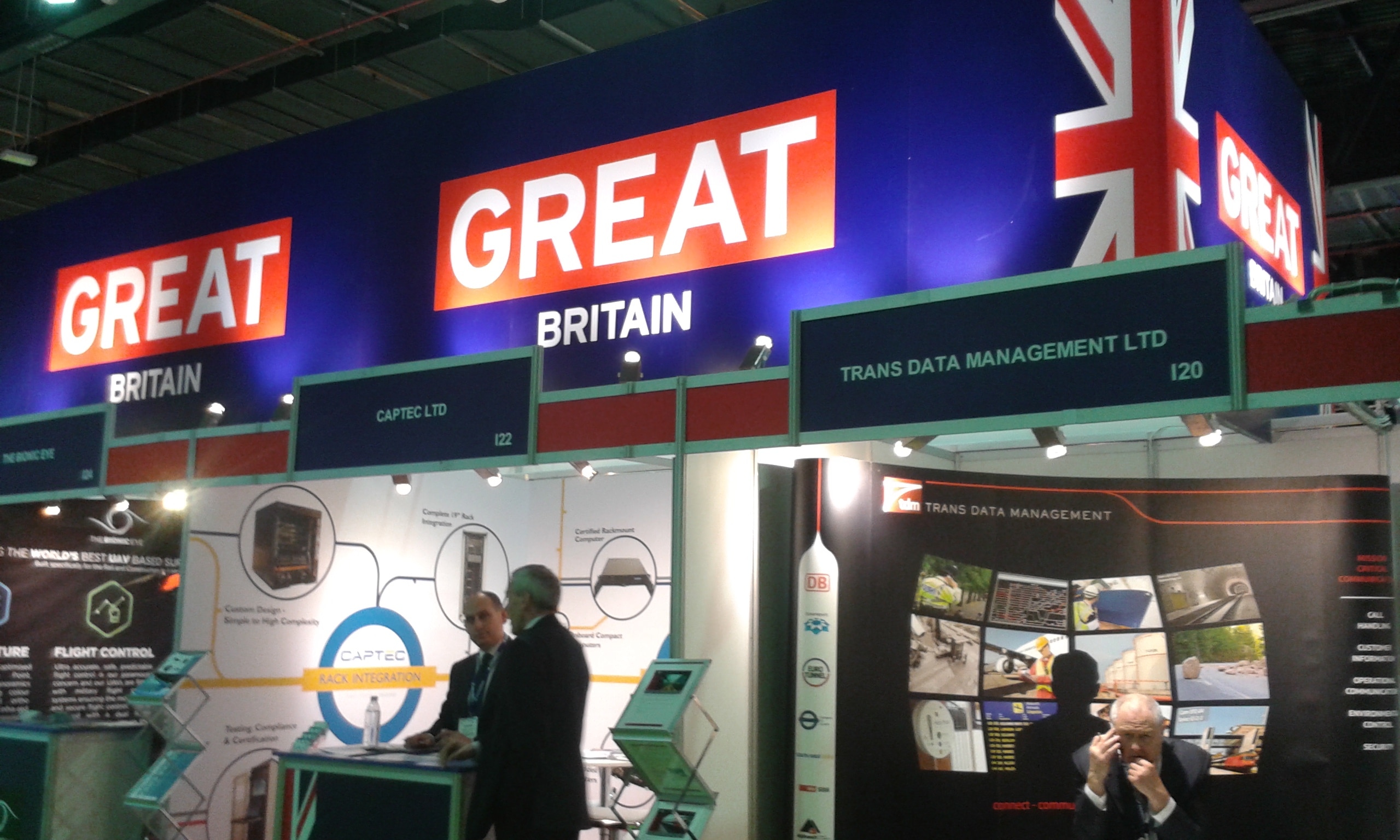 Aside from the corporate stalls, there was a series of talks in two major halls and five smaller stages sponsored by corporations. The stages were: technology, infrastructure, maintenance and Cargo 1 & 2 which focused on “integrated supply chain management” and included speakers from the Logistics Integrated WLL, Jumbo Electronics, APL Logistics UAE, Milaha Maritime, Aujan Coca Cola and Google among others.

In the non-rail sections of the exhibition floor, logistics companies and ports took up most of the space. Representatives from Oman’s Sohar port and free zone shared their vision to make “Sohar port the main gateway” to the GCC, noting that Sohar will be the starting point for the GCC rail line as well.  The presentation on Saudi rail was fascinating. The speaker from the operations unit of Saudi Rail described in detail the heavy industrial cargo transported from industrial cities on the new South / North tracks, also underscoring the connection to ports. Automation was a big topic of discussion in most sessions with long technical explanations about the virtues of driverless trains.

Most of the logistics companies present operated out of Dubai’s Jebel Ali port and stressed their ability to deal with the new challenges of e-commerce in the region. Their sessions, however, consisted mainly of company marketing speak highlighting the new boom in the logistics market in the region and why they want to lead it, rather than giving any detailed information.  It was interesting though to hear specific mantras repeated throughout: “this region is a growing logistics hub” and the “customer nowadays needs more of us and wants everything fast”.

The makeup of the space itself, much like PMSCs exhibitions, was hyper masculine. The only women present were serving food, ushering or modelling at the exhibits. When I asked any of them questions beyond the most obvious about the company, they referred me to a male engineer or marketing executive.  At 19 of the sessions I was the only woman in the room.

On a final note, it was very clear that Dubai city itself is regarded as the model to aspire to in the logistics sector, but also to go beyond. This could have been a factor of the exhibit being held in Dubai, but certainly most speakers idealized Jebel Ali container port and all wanted to draw lessons from Itihad rail. It is very fitting that my journey into the world of GCC logistics started in Dubai, but also very fitting that I enter it after two years of practice in PMSCs industry exhibitions – the two worlds certainly more than intersect.